ROLLING STONE: In newly released audio from a March 1966 interview, Bob Dylan claims he kicked a heroin habit after moving to New York City. “I got very, very strung out for a while,” he says in excerpts released by the BBC. “I kicked the habit. I had a $25 a day habit and I kicked it.” He was speaking to New York Times writer Robert Shelton on a plane from Lincoln, Nebraska to Denver while on his legendary 1966 electric tour. This may sound like a huge revelation, but Dylan has been telling journalists wild lies about his past since the earliest days of his career. He was particularly prone to fabricating stories in the mid-Sixties.  In another 1966 interview with Shelton, Dylan claimed to have worked as a prostitute when he first arrived in New York. “Sometimes we would make one hundred a night, really, from four in the afternoon until three or four in the

morning,” he said. “Cats would pick us up and chicks would pick us up. And we would do anything you wanted, as long as it was paid…I almost got killed…I didn’t come down to the Village until two months later. Nobody knew that I had been hustling uptown.” MORE

BBC: Elsewhere on the tapes, Dylan reveals he contemplated suicide after people started calling him a genius. “Death to me is nothing… death to me means nothing as long as I can die fast. Many times I’ve known I could have been able to die fast, and I could have easily gone over and done it. “I’ll admit to having this suicidal thing… but I came through this time,” he says. MORE

ROCK SNOB ENCYCLOPEDIA: Zimmerman, Robert: Aka Bob Dylan, aka the Mystery Tramp, aka Napoleon in Rags. A long time ago, in a galaxy far, far away, Bob Dylan was the all-seeing eye atop the pyramid of rock–a razor-thin, tousle-haired visionary speaking in stoned parables and meth-riddles about the nature of transcendental consciousness from behind impenetrable black shades. His status as generational oracle was earned by a triumvirate of hallucinatory folk-rock albums–1965’s Bringing It All Back Home and Highway 61 Revisited, and 1966’s Blonde on Blonde–that he would spend the rest of his career simultaneously trying to live up to and live down, never quite succeeding on either count. MORE

MYSTERY TRAMPS: Bob Dylan’s Modern Times Vs. Paris Hilton’s Paris
Hi, kids. Welcome back! You can leave your summer book reports on The Stranger and the cruel meaninglessness of existence so-why-even-bother? — in 800 words or less — on my desk after class. And be forewarned, anyone still pronouncing the author’s name like “anus” is simply not going to pass this class. On a happier note, I have a fun assignment for you today: Compare and contrast the new Bob Dylan album Modern Times with the new Paris Hilton album, which is called … wait for it … Paris. 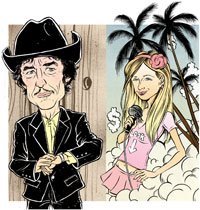 Why all those frowns? What’s that, you say? Dylan is old and in the way and smells like Vincent Price and sounds like cancer? You poor babies—what a small pillow you have to dream on. Here, I’ll get us started. Hip irony would almost certainly dictate that we champion Paris over Dylan—that we find something au courant and zeitgeist-defining in her puddle-deep shallowness and that, conversely, we somehow find something passe and antiquated in Dylan’s depth. Well, fuck hip irony. Sure, it’s never been hard to dismiss the cult of Dylan as a geeky sausage-party circle- jerk for overread fiftysomethings who just can’t admit it’s o-v-e-r, but at least he has a cult. I’m not sure Paris Hilton even has a fan base outside the stalkerazzi that devour her as omnivorously as they once devoured Dylan.

As Dorothy Parker once said, “If you want to know what God thinks of money, look at the people he gives it to.” Maybe that’ll be Paris’ great contribution to humanity—a redeeming act that’ll explain to future generations why we ever gave a shit­­—and close out the long overdue tab on her 15 minutes. She’ll be remembered as the once-living proof that money can’t buy everything. Anyone expecting Paris to be anything more than a six-figure karaoke party we get to overhear from the wrong side of the velvet rope will be sorely disappointed. Hilton wanted to be a pop star because, best she can tell, it’s one more thing her money can buy. Dylan taught himself to sing for his supper, because otherwise it was just one more thing he couldn’t buy. With a voice like his, most other people would have gone hungry.

Paris’ Capri-thin pipes have been fattened like foie gras and given the finest airbrushing money can buy—double-tracked, pitch-corrected and laid into the mix at flattering angles in the same way right-swept bangs can distract from a problem nose. Like her “hot” couture wardrobe, the songs have all been bought from the biggest design houses for her to try on, accessorize and be seen in. Does this reggae jawn make my ass look big? I am so hot in this Rod Stewart song!

Dylan too spent a lot of time on his vocals on Modern Times, finding surprising reserves of emotion and expressiveness in that smoke-wrecked instrument. Unlike Hilton, Dylan got his songs the old-fashioned way—he earned them. Busy being born, busy dying and now busy being reborn. He’s seen it all at least twice. Those lines in his face? There are entire novels in each and every one—which is why Modern Times will fit comfortably next to Love and Theft and Time out of Mind on the library shelf where they stock uncommonly good late-period trilogies by American masters. Already Paris is fading, like an old newspaper, to be remembered, if at all, for it’s bottle-blonde ambition, bikini-waxed soul and for setting back the cause of cluelessness at least 20 years—just when it was beginning to make some real strides. – JONATHAN VALANIA, 2006