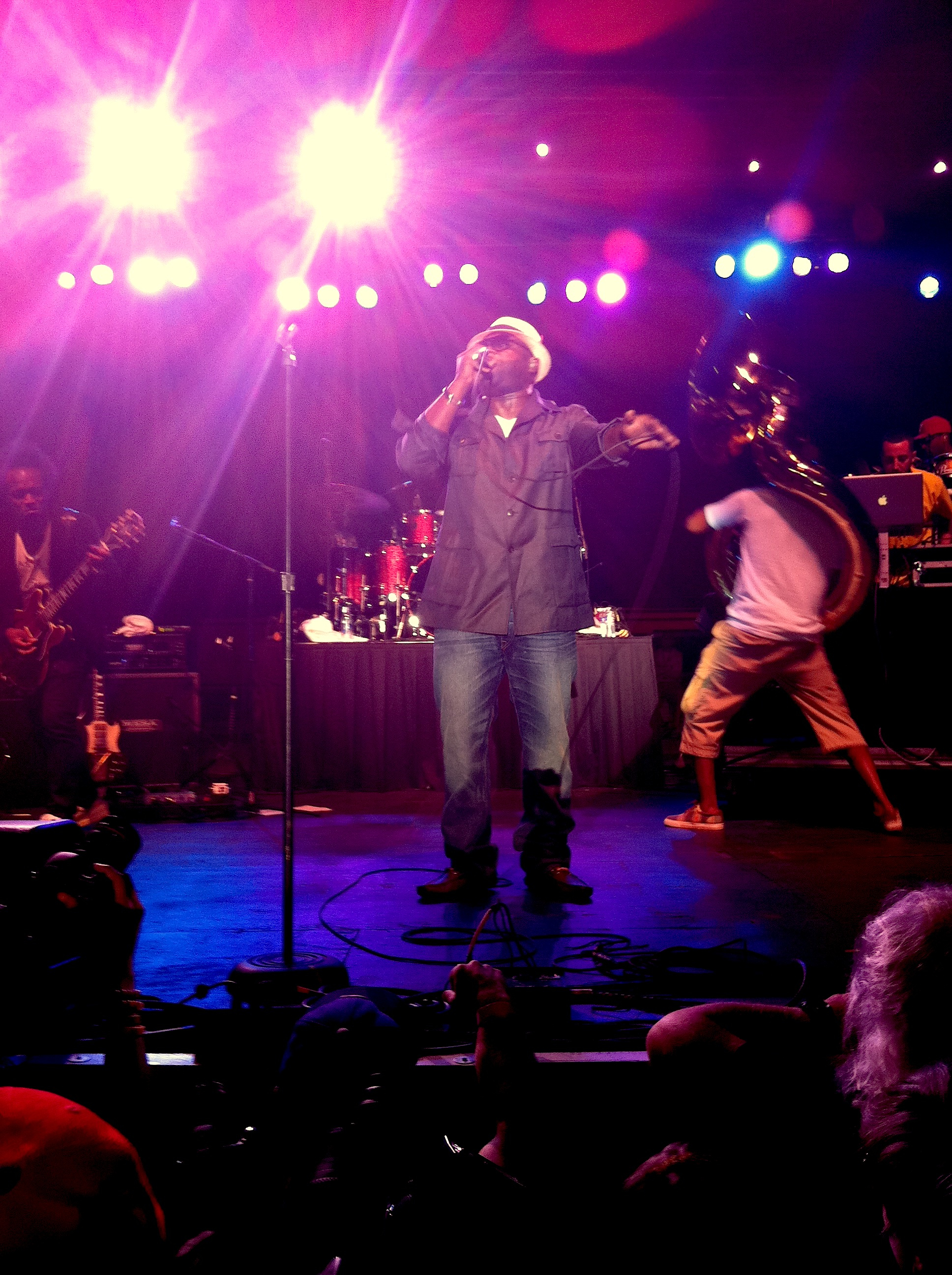 BY COLONEL TOM SHEEHY Philadelphia has always had its great musical and cultural traditions. From the Mummers and their string bands in the winter, to the Philadelphia Folk Festival and the Welcome America celebration on the Benjamin Franklin Parkway during the summer months, and now Philly has The Roots Picnic on Festival Pier every June. Walking onto the pier, you are at first taken by the sweep of the place. First there is the big stage. Big it surely is, but most importantly, the sound production is outstanding. Next, one would have to notice the floor. Yes there are the folks who want to be close to the stage, but about half way back, there are those who really feel as if they are at a picnic, so they lay down on their sides and chomp on some food or drink some liquid.

On the perimeter of the pier there are many vendors serving up all kinds of scrumptious eats. Saturday, one could not help but observe that many folks were holding bottles which contained gold colored liquid. It was quite apparent that Miller Genuine Draft was the preferred delicious beverage of the day, and delicious it was indeed. At the end of the pier, is the much talked about big white beautifully air-conditioned tent. It is as advertised: big, white, and climate cool inside.

Backstage is like a family scene. There are lots of moms and dads and little kids running around having a good time, just like they would at a family picnic. A basketball net was hung up as different folks tried out their skills with the ball. This was not your typical backstage vibe where people front and wear as much sarcasm as mascara. This was truly a family affair: Mostly family and friends of The Roots and the other artists with a smidgeon of music industry types with a food buffet that tasted like your Aunt made it; not some caterer from downtown.

It was backstage where I bumped into Touré who was hanging out. Touré is a music journalist, a cultural critic and a public intellectual from New York City. As we got talking, I asked him what is the national perspective of The Roots Picnic and the band itself. He said to me, “?uestlove is the cultural mayor of Philadelphia.” He told me that people from all over the world are calling the 215 wanting to work with ?uestlove; they want him to be their musical director on their next project. One of those recent callers was Prince.

As I looked at my watch, it was time to finish up my dish of savory fried chicken, and head on over to the big white tent. The tent was packed with people and filled with anticipation for the next act: Yelawolf. Marshall Mathers, a.k.a. Eminem signed Yelawolf to his label, Shady Records. The Alabama native’s debut album, “Trunk Muzik 0-60” sounded somewhat like a cross between an economically challenged person’s Eminem and left over Vanilla Ice. But on stage the kid does have skills. And he sure has developed an impressively large following of fiercely loyal fans in Philly. He has great call and response repartee with the crowd and the dude sweats like a swine which made his comprehensively tattooed body look like all the ink was just inscribed to his torso. The highlight of his truncated set was “Get The F*** Up!” I’d be curious to hear his sophomore release. Maybe Marshall can get some help from Dr. Dre for the next record.

Next up was a trip across the pier to hear one of the most highly anticipated sets of the day. To millions of teenage girls throughout America, she is known as that woman who beat out Justin Beiber for the Grammy for Best New Artist. However, to serious music aficionados, Esperanza Spalding is both an exquisite jazz artist with masterful vocal stylings, and a bass player who just may be the Stanley Clarke of the 21st Century. Backed by The Roots, Spalding opened her set with two compositions from her second album entitled,”Esperanza.” There she was, this much talked about jazz singer who accompanies herself on stand up bass. It was surely a site to see, but hearing that refined yet exuberant voice over that energetic bass playing during both the songs “Precious” and “I Know You Know” was both fiery and intimate at the same time especially with ?uestlove providing background vocals. Spalding then took the time to talk to the crowd about jazz. This former teacher from the prestigious Berklee College of Music in Boston, told her audience that people are saying that jazz is making a comeback. Well, Spalding noted that in her opinion, “I never thought it went away.” She then announced the next selection was something from Weather Report. She and her backup band tore into a blistering rendition of “The Perdator.” Anyone who has ever seen The Roots live, knows that it is ?uestlove’s forceful drumming that drives that band, yet during this Wayne Shorter composition, it was Esperanza Spalding who was pushing The Roots to a higher level of intensity that would have put even Jaco Pastorius in awe; a well served set indeed.

Following Esperanza Spalding on the big stage was the skinny kid from Pittsburgh. Along with DJ Bonics, and his boy Chevy Woods on back up, Wiz Kalifa strutted on stage like the newly crowned prince of rap. This East Coast influenced MC performed many tracks from his mix tapes such as, “Phone Numbers,” “Cabin Fever,” and “Gang Bang.” Wiz then covered a Young Gunz song, “No Better Love'” and all of sudden, Young Gunz came out on stage to join in on all the swaggering. Then, as if by magic, Beanie Segal appeared on stage to add fierceness to Jay Z’s “Do It Again” as Wiz and Chevy sat down and watched with huge smiles on their faces as the big man worked the mic Philly style. Throughout his set, Wiz did some sensual dancing for the ladies and he kept sending shout outs to those smoking them weeds. The crowd responded by throwin’ some blunts onto the stage, to which Wiz laughed furiously with appreciation. Wiz then zoomed into a bunch of tracks from his new slamin’ album “Rolling Papers.” From “The Race” to “No Sleep” to “On My Level” then to what just may be the single of the year, “Roll Up.” With his audience going wild, Wiz closed out the set with the song inspired by his beloved Pittsburgh Steelers, “Black and Yellow.” After which, he walked off the stage like the street-wise champion that he truly is.

Closing out the evening was the main event of the day: The Roots with special guest Nas. What a year The Roots have had. From winning Grammys, to backing up Bruce Springsteen on Late Night with Jimmy Fallon, and next month, they will headline Philly’s annual Fourth of July celebration, Welcome America on the steps of the Art Museum. Saturday night, Festival Pier was like a homecoming party for Philly’s heroes. And those heroes partied and played their butts off. Like on the torrid versions of “The Fire” and “How I got Over” from the album of the same name. There were also moments of absolute hilarity. Like when Tuba player Damon Bryson transformed himself into a dancing machine, and he even got guitarist Captain Kirk Douglas and bass player Owen Biddle to join him in series of line dances. As The Roots hit it up old school with some of Kool and the Gang’s “Jungle Boogie,” the Festival Pier became the funkiest joint on the planet. Following that, it was star time, as Nas walked out on to the stage.

Nas said, “How about some Illmatic.” Roots hit it with, “It Ain’t Hard to Tell,” “The World is Yours” and “If I Ruled the World.” At that point, ?uestlove was slammin’ on his snare drum furiously. It was as if he knew that he and his band were kickin’ it live with arguably some of the greatest rap material of all time. Then, all of a sudden, all of those folks from backstage with VIP laminates, began to appear along the sides of the stage and a phalanx of camera phones began to work overtime. As I witnessed that moment, I had the sense that I was in the presence of rap royalty. Nas continued to run it down on a stage which had the mighty Delaware River running under it, yet it was Nas who had the stronger flow that night. Nas closed his portion of the set with “Hip Hop is Dead” which was so ironic after witnessing the best rymin’ that was uttered all day. Nas triumphantly left the stage, and The Roots closed out the picnic.

As there were humorous moments in the first part of their set, there was a final moment of deep solemnity, as Black Thought announced a tribute to the late great Gil Scot-Heron. Thereupon, The Roots launched into a searing interpretation of the late poet’s masterpiece, “The Bottle.” And at that juncture, Black Thought gave what was undoubtedly the most impassioned and stirring vocal performance of the evening and a fitting way to end a perfect day.