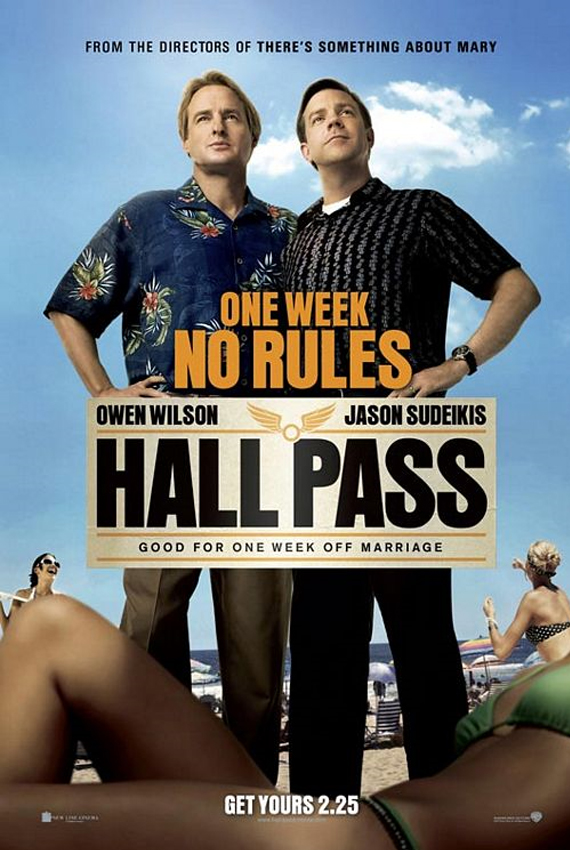 Could it be a bout of 1990s nostalgia that had me yearning to see a new film from the Farrelly Brothers? I’ll admit to having a blind spot when it comes to their early hit Dumb and Dumber, but 1996’s bowling opus Kingpin and 1998’s monster hit Something About Mary had a wonderfully unpredictable mix or shock and sweetness that seemed to mark the pair as a major force in film comedy. The illusion was fleeting though, with films like Shallow Hal and their Heartbreak Kid remake finding the pair with an uneven grasp of tone and, more importantly, a diminishing number of laughs. Was it too late for these Clinton-era jokers to regroup?

Hall Pass‘s basic premise seems to underline the tiredness the Farrelly have shown over the past decade, its suburban milieu could be the setting for half the sitcoms on TV. Owen Wilson and SNLer Jason Sudeikis are a couple of married shlubs who still ogle the ladies like they were horny middle-schoolers. Their wives, played by Jenna Fischer and Christina Applegate, decide to let them off the leash for a week, confident that given the chance to roam, these dopes will realize how good they’ve got it. You can see where this homily is headed right from the start, and while the film predictably preaches marital fidelity, thank goodness there are some huge Farrelly-patented laughs along the way.

Owen Wilson’s Rick is too aw-shucks good to seriously consider sleeping with someone else so he’s stuck playing the straight man to Sudeikis’ Fred, the randier of the two. It’s Sudeikis’ first major film role and while he captures a little of the jocular mania a young Dan Akroyd once displayed, he isn’t the sort of scene stealer this film needs. Much more amusing are the smaller character roles that line the film’s edges, particularly Rick and Fred’s posse, played by Curb Your Enthusiasm‘s J.B. Smoove, Larry Joe Campbell and Ricky Gervais’ collaborator Stephen Merchant. As these three ride sidecar on Rick and Fred’s babe hunt, the film takes on the joyous, loose quality that is the Farrelly Brothers at their best. Throw in Richard Jenkins as the hip-hop attired, forever-young mentor Coakley and you’ve got the most memorable Farrelly’s comedy in a decade.

But many of the film’s shortcomings seem so avoidable, particularly the glaring product placement that has the cast giving testimonials for the food at Applebee’s, or that pint of Ben and Jerry’s whose label miraculously turns to the camera in every shot. What finally hampers the film most is the lead character’s mixed feelings for their freedom; if they can’t get excited about the premise, how is the audience supposed to? Hall Pass may have a dirty mind, but the impotence at it heart can’t even restore the fire in these poor yuppies’ marriages. The Farrelly’s message: married men, your boners are ridiculous.