BILLBOARD: Vampire Weekend will headline the third annual Roots Picnic, which will also feature a performance by the Philadelphia-based Roots plus two associated side projects from drummer Ahmir “Questlove” Thompson and rapper Tariq “Black Thought” Trotter. The event will be held June 5 at Philadelphia’s Festival Pier; tickets go on sale Friday (March 5) via LiveNation.com. Also on the bill are Clipse, Mayer Hawthorne, Nneka, the Very Best, Tuneyards, Das Racist, Bajah and the Dry Eye Crew and Pattern Is Movement. In addition, Questlove will play a set with fellow Philadelphia native DJ Jazzy Jeff, while Black Thought will perform with his side project the Money Making Jam Boys, which also features Dice Raw and Truck North. MORE

HIP HOP DX: If that weren’t enough, The Roots will also bring a reunited group to the stage. “This is a reunion we thought we would never get. We’ve been waiting to make this reunion happen for the longest. It’s so incredible I don’t even want to tell you who it is,” he said before putting on a gold rope chain and a black hat, insinuating that Run and DMC will be present. MORE

PREVIOUSLY: When it comes to The Roots — currently in-residence as the house band for Late Night With Jimmy Fallon and arguably the greatest live 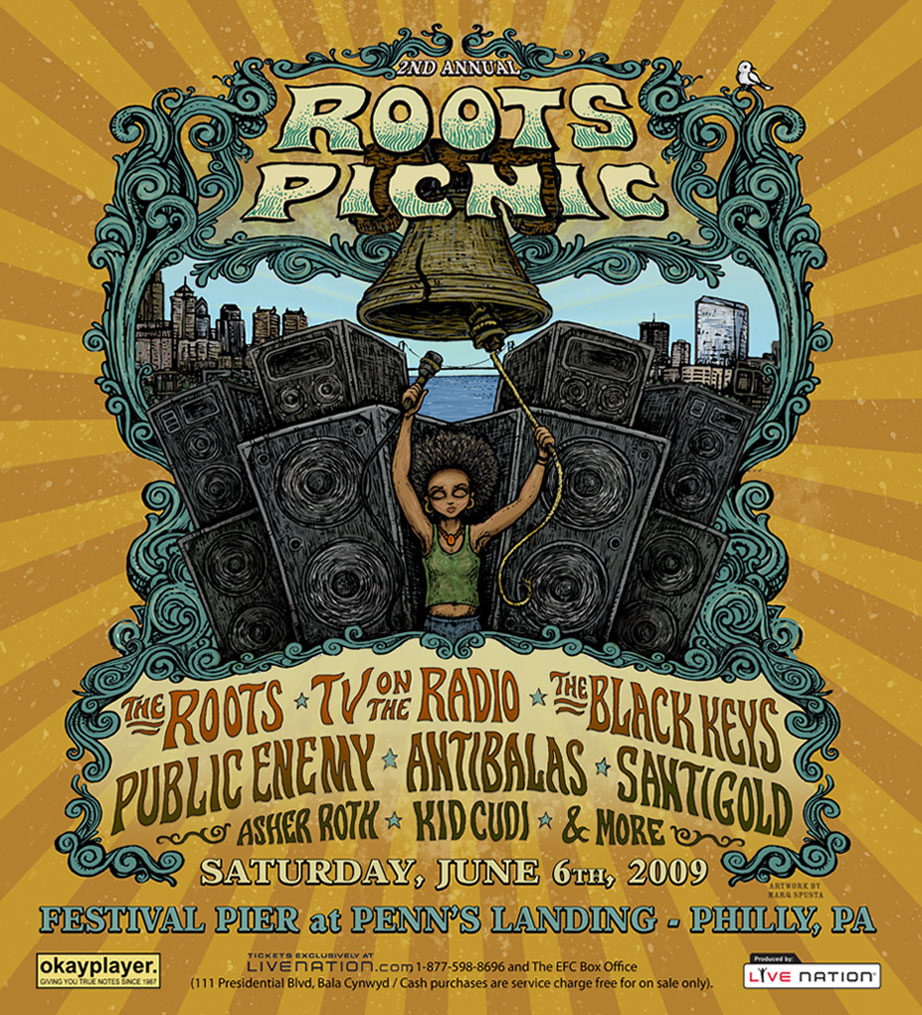 act on the planet — you must always expect the unexpected. So it should come as no surprise that Saturday’s second annual Roots Picnic at the Festival Pier in Philadelphia was a 12-hour all-you-can-eat-and-then-some feast of wonderful WTF-ness. What other band would kick off their own multi-genre lollapalooza — featuring the likes of Public Enemy, TV On The Radio, The Black Keys, Santigold, Kid Cudi and Asher Rother — with an impromptu improv with guest MCs Jordan Knight and Donnie Wahlberg of New Kids On The Block (who just happened to be performing later that night across the river at the Susquehanna Center in Camden)? Who else would dare back up Chuck D. and Flava Flav for a beginning-to-end live rendition of Public Enemy’s 1988 landmark album It Takes A Nation Of Millions To Hold Us Back? Who else would book the Black Keys’ sludgy biker-blues choogle in between Ohio player Kid Cudi’s uber-catchy indie-rap and Santigold’s retro-pop readymades from the Ray Ban-ed dawn of MTV? Small wonder we saw so many ?UEST FOR PREZ T-shirts in the crowd. MORE