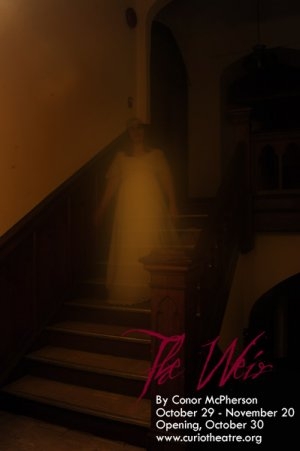 BY AARON STELLA Forget the fact that we were born with two ears and one mouth; let’s get real people, homo-sapiens love to yak; dark corners of a smokey pubs especially included (oh how I miss thee, smokey pub). And supernatual folk tales usually make for amusing fare. But the questions stands, as it always will: what’s up with the story and its teller? Starting tomorrow, The Curio Theater Company will be  forking out the insides of raconteurs and their confab (pub-life included) in their production of Irish playwright Conor McPherson’s “The Weir”. As an insufferable yakker myself, I had to get the goods on this one a little early. Gay Carducci, Managing Director of the Curio Theater Company, tells me their company self-specializes in producing plays that focus the unique humanness of people, and so saw “The Weir”, an especially “talky play”, as the perfect production with which to open the season. Carducci was kind enough to indulge me in an interview, contained in which are a few teasers, as you can see below:

PHAWKER: What is it about this play that inspired you to produce it?

CARDUCCI: Well, the play is basically about folk tales and the supernatural as told by three local men meeting at this pub. There is a fourth man involved as well, who has moved away from this  tiny town to a slightly bigger town, and now he has come back, accompanied by a new woman to the area who has either bought or is renting a house up the street from the pub. Much of the play is about the men’s interaction and how they reveal things about themselves, how they tell stories, how they perhaps try to gain the attention of this woman; it’s a very talky play—just people sitting around being real, engage in conversation.

PHAWKER: In any conversation, there are many aspects of a person that are communicated by non-verbalized means. This is always a challenge in my mind when it comes to “talky plays” as you put it. And you stuck to the original script, I take it?

PHAWKER: Where was the first place you saw this play produced?

CARDUCCI: Actually, I’ve never seen the play produce. I’ve read it, and I’ve read a lot about it, but I’ve never seen “The Weir” produce. We [the Curio Theater Company] like to take stories that really focus on the humanness of people, and so our artistic director [Paul Kuhn].  chose to open this season with this particular play for that very reason.

PHAWKER: Taking from your account of the play, I see why: human speech is a deeply fundamental function of our species. And what’s more—what I think makes this play interesting—is that, as you said, it’s about folk tales involving the supernatural. Do the characters in this play actually believe in the supernatural, or is the supernatural of device employed self-consciously—literally, if you will?

CARDUCCI: It’s old folklore they’re telling, and so in their tellings is that feeling of truth; it is a question asked amongst themselves: who believes what?

PHAWKER: It intrigues me to have the opportunity to view a theatrical production that gravitates around this highly important aspect of human functionality. Any of us who have been half-conscious in a dialogue know how much goes on in the duration, and I think, therefore, that it’s really a challenge for actors, in this case particularly, since the audience is equipped with a third-person perspective, nolens volens. One would think that that filter might helps the audience to comprehend the profundity of all that the actors are saying, but really it doesn’t: the audience is not participating in the conversation the way they would in real life, and are not privy to the tacit movements therewith that we spoke about previously.

CARDUCCI: That’s true; however, we’ve put the audience as much as we can in this world of the pub as possible—and I’ll think I’ll just leave it at that. Don’t want to spoil anything.

“The Weir” Opens 8pm tomorrow  at the parsonage of the Calvary Center for Culture and Community located at 815 South 48th Street and will go until November 20th. You can read more about the play and purchase tickets here.