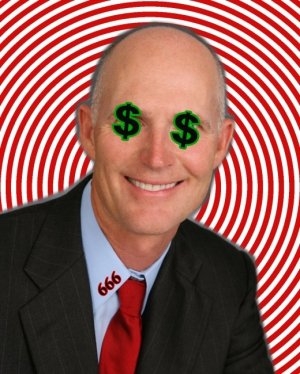 Century Foundation fellow Maggie Mahar is the author of Money-Driven Medicine: The Real Reason Healthcare Costs So Much, published in 2006. A former financial journalist for Institutional Investor, The New York Times, Barron’s and Bloomberg, Mahar writes the Healthbeat blog, a Century Foundation project. She has also contributed to Dartmouth Medicine, covering Medicare spending and the possibility of reform. Money-Driven Medicine argues that, over the past century, the history of U.S. health care has been shaped by corporate interests’ gradual encroachment on physician autonomy. According to Mahar, this has produced a system of costly and inefficient competition among providers, leaving Americans worse off than citizens of other industrialized nations.

PREVIOUSLY: People like Dick Scott — and the lobbyists of K Street who are paid seven figure salaries to pull the puppet strings of Congress and protect the massive profit margins of ginormous health care conglomerates  — are essentially advocating for the status quo because there is money to be made. A lot of money. This year Americans will spend nearly 3 trillion dollars on health care. Three trillion. That’s four times the amount we spend on national defense. According to a 2008 report by Health Matrix, 1.5 million Americans lose their homes every year to foreclosure because of medical debts. A recent survey conducted in Iowa revealed that 44% of respondents have to cut back on food and heating expenses to cope with rising health insurance costs. A recent report indicates that a married couple entering retirement will require a quarter of a million dollars to cover their health care costs. And what do we get for that three trillion dollars we spend every year? In the year 2000 the World Health Organization ranked the U.S. health care system 37th in overall performance and 72nd by overall level of health among 191 member nations included in the study. The CIA World Factbook ranked the United States 41st in the world for lowest infant mortality rate and 46th for highest total life expectancy. According  to the Institute of Medicine, 100,000 Americans die annually from medical errors — more than double the number of Americans who die annually in car crashes. MORE “America is an aspirational society” wrote Joe Queenan in a column the “Guardian.” He should know as he grew up in the Schuylkill Falls housing project near East Falls in Philadelphia and is now a successful culture critic and author of several books. Queenan’s recent book, “Closing Time” is about growing up in working-class Irish American Philadelphia in the 1950s and 1960s.

RELATED: Oscar Wilde famously postulated that all of us are in the gutter, but some of us are looking at the stars. Writer Joe Queenan wasn’t born in the gutter — actually it was somewhere near the false bottom of the Irish Catholic working class of Philadelphia circa 1950 — but you could see it from there. His father was a study in boozy failure and casual brutality whose self-inflicted setbacks would drag the family Queenan — Joe, three suffering sisters and an emotionally-remote, enabling mother — down to the ranks of the lower class for a four-year exile in Philadelphia public housing where they endured all the attendant deprivations, miseries and daily indignities to be found there. It was reading, along with a few fully-functional relatives and the pageantry of Catholic ritual, that showed Joe it didn’t have to be like this. And thus began Queenan’s long ladder climb up from the bottom, all of which he renders with stark clarity and wicked humor in Closing Time, his just-published memoir. It is no exaggeration to call it a heartbreaking work of staggering genius — you’ll laugh, you’ll cry and in between you might even learn something. Today Queenan is a highly-regarded humorist, critic and author with eight books under his belt, including the Baby Boomer-eviscerating Balsamic Dreams and  Red Lobster, White Trash, and the Blue Lagoon, his snark-fueled odyssey through the deepest depths of the American low brow. MORE