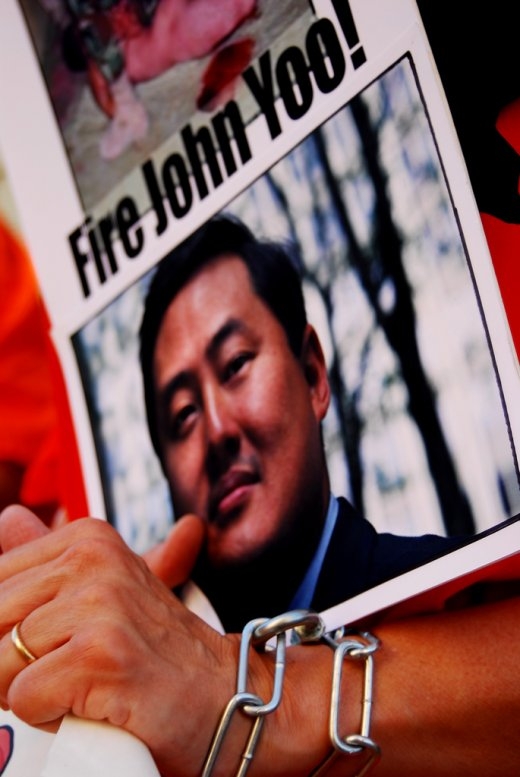 BY KYLEE MESSNER “Phoo on you, we hate Yoo,” chanted Norman Koener, head member of Philadelphia’s World Can’t Wait chapter.  Unfortunately for Koener, a crowd of photographers and Delaware Valley War Veterans were the only ears listening to World Can’t Wait’s pleas to stop torture.  Sporting a mask resembling torture lawyer John Yoo, Koener and WCW carried on with their protest against torture and waterboarding demonstration as planned for the National Day Against Torture.  Hoping to gain support for prosecution against those responsible for committing torture at, the organization laid their attacks on the U.S. government as a whole, with attacks against John Yoo, the former Bush administration lawyer that wrote the legal memos justifying torture, and Barack Obama. Candidate Obama’s call for accountability for the Terror War excesses of the Bush administration stands in marked contrast to his actions as Commander-In-Chief.

“No one has actually done a waterboarding demonstration in Philadelphia,” said Kip Koyuki,  the Philly rep for WCW.  “If they [the Philadelphia Inquirer] want to hire the architect of torture, we want to show what it’s like at the place where he was hired.” The WCW organized the protest in an effort to inform the public about the two-thousand torture photos that have yet to be released by the United States government.  In a recent interview with the UK’s daily telegraph, Major General Antonio Taguba — who conducted the official Pentagon investigation into the abuses at Abu Ghraib that exposed details of sexual humiliation and physical abuse —  confirmed that some of the unreleased photos depicted rape and sexual abuse of prisoners. These photos were scheduled to be released by May 28th — that is until President Obama reversed his orders in the name of protecting American troops overseas from retaliation.

“No American lives were saved as a result of torture,” said Steve Young, a representative for WCW.  “What kind of society is it that they need to embed torture on an entire population as a means of punishment,” Young asked. Directing his attention to the crowd of media around him, Young proposed another question.  “Why do you support torture by writing about what torture is,” Young asked, referring to the column given to torture lawyer JohnYoo by the Philadelphia Inquirer.  “Did we allow Hitler to have his own column,” Young added.

Looking on from a distance, an unidentified employee from the Philadelphia Inquirer building shouted, “Stop wasting your time.  Go home!” As if to answer him, NormanKoener reasoned, “There are some people that say why not move on.  If we move on, the people that perpetrated these crimes will not be held accountable.”

“This was not something limited to three individuals,” said Koener.  “There is evidence that children, yes children were tortured at Abu Ghraib,” Koener added. Then members of the WCW gathered into the center of the small crowd with a table, two bottles of water, and a man sporting a camouflage hood over his face.  Hands duct taped in front of him, the acting detainee was verbally abused by NormanKoener, the acting interrogator. Punching the ‘detainee’ across the face, Koener shouted, “We know you were there!  Give us the names!”

And still the prisoner refused to speak until Koener was given orders to water board the ‘detainee.’  Spread across a table supported by two egg crates, the crowd watched as water was poured over a cloth lain across thedetainee’s face.  Refusing to answer a second time, the water boarding process was repeated until the actor was pronounced “dead.” Fortunately for the ‘detainee,’ a plastic guard was placed across his nose in order to prevent water from getting in and instilling the hysteria of a drowning man.  TheWCW emphasized no such protection is offered to actual detainees during acts of torture. With the ‘detainee’ lying lifeless on on the ground, the WCW thanked the crowd for their attendance, noting the importance of prosecution of all perpetrators of torture. The WCW is scheduled to hold another demonstration within the next two weeks.