Do you like to read books? Do you have an opinion of those books you read? Can you speak English? Do you secretly long to be a pompous-and-opiniated-but-always articulate-witty-and-absolutely-correct-about-everything book reviewer for the metroblog of record in the sixth largest metropolis in the United States of America? If so, drop us a line at feed@phawker.com. Because in these hard times, you need free books — and Phawker needs book reviews that taste great don’t suck. 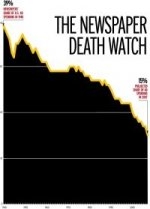 RELATED: The Sun-Times Media Group, owner of the Chicago Sun-Times and dozens of suburban newspapers, filed for Chapter 11 bankruptcy Tuesday, making it the fifth newspaper publisher to seek protection from creditors in recent months. The step, brought on by a precipitous decline in advertising revenue, means both of Chicago’s major daily newspapers are operating under bankruptcy protection. Tribune Co., the parent company of the Chicago Tribune, Los Angeles Times and other newspapers, filed for Chapter 11 in December. The Sun-Times Media Group, which filed in a Delaware court, said it will continue to operate its print and online properties. The company listed $479 million in assets and $801 million in debt. The largest unsecured creditors are newsprint vendors. Three are owed more than $1 million each. MORE