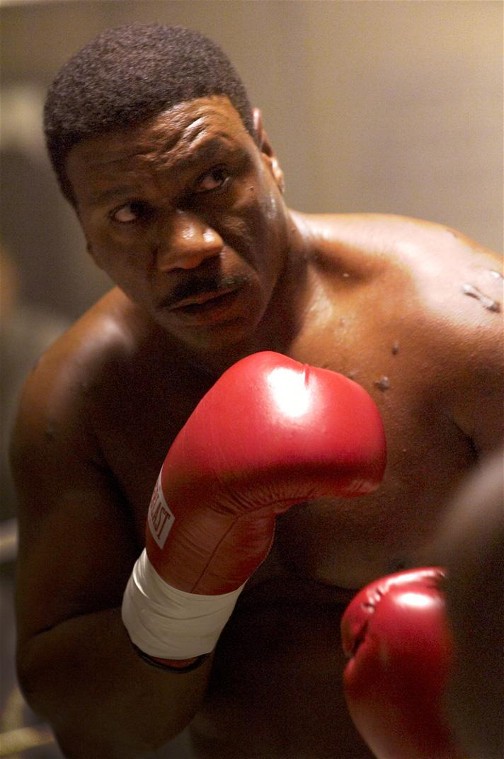 Tonight is your only chance to catch up with the latest film from Robert Townsend, who broke into the business in a big way twenty-two years ago with the black comic satire Hollywood Shuffle.  Townsend has never recaptured that early success, although he has continued to direct, helming TV biopics of both Natalie Cole and Little Richard.  In Phantom Punch Townsend tackles the biography of former Heavyweight Champ Sonny Liston, the hard-punching fighter who back in the sixties struck fear into fighters like few others. The always reliable Ving Rhames (of Pulp Fiction) brings a dignity to this sullen boxer, distracting us from the fact that he isn’t a particularly interesting character.  What has maintained historians interest in the man was whether Liston took mob money to throw his rematch to the soon legendary Cassius Clay.  Phantom Punch  concentrates on this element of the story, walking NYPD Blue‘s Nicholas Turturro through a number of Sopranos-inspired scenes.  The film is crying out for a scale that the budget won’t allow yet on its small stage Phantom Punch is not without its effective moments.  Major complaint though: why would you make the Sonny Liston story and reduce the Cassius Clay character to a mere walk-on? — DAN BUSKIRK

Of course “heartbreaking” is the first word you think of to describe this harrowing documentary from Hart and Dana Perry.  The subject is their son Evan, who battled bipolar disorder since he was a toddler and succeeded in taking his life at the age of fifteen.  You’re welcome to channel the ocean of sadness that these mourning parents are experiencing but beneath the film’s wrenching story is a valuable case study on the challenges of mental illness.  Evan is a charismatic subject of study, watching him improvise a song to his younger brother on guitar, with the lyric “Pretty please kill me” makes for a mesmerizing and all-too-real moment of suburban horror; it is as if this sweet-faced elementary school kid has been taken over the troubled ghost of Kurt Cobain.  Evan bounces back and there is a heroism in his triumph to momentarily hold off his demons, which gives an emotional range to this ultimately tragic and unforgettably intimate portrait. — DAN BUSKIRK

Perhaps the most irritating film in this year’s festival, Able brings together four stories of embattled survivors of an unnamed plague.  Able labors to make the most out of its distressed locations (the film is a Philly-production, shot in Berlin), its sweaty actors and its foreboding score and it ends up reminding us of those Roger Corman cheapies, where actors were filmed endlessly tiptoeing around old castles in an attempt to pad out the running time to feature length.  A ranting preacher (“A living dog is better off than a dead lion!”) and some semi-zombie sex might titillate the Goth crowd yet too often the humorless Able evokes repressed memories of the pompous student films that bedevil college film programs everywhere. — DAN BUSKIRK

Cuttin’ Da Mustard would be disaster if it wasn’t for the ingratiating cast in this wildly uneven debut from director Reed R. McCants.  Blessed with first-rate talent, this shaggy dog story follows Rolo (Brandon T. Jackson, who stole his share of laughs in last summer’s Tropic Thunder) as he dumps the much-too-white uptown acting class to join the funkier crowd at an upstart Queens theater company.  There must have been some sort of script when they kicked off this project but much of the comic riffing feels like it was cooked up on set, creating the good-natured vibe of talented breakout performers making something out of nothing.  Further boosting comes from the seasoned fifty-something talents of Sinbad (given a few asides as a philosophical bartender) and the always imposing Charles Dutton.  The best idea that director McCants has is to give Dutton a cameo performing Shakespeare’s King Lear, allowing the film a fleeting moment of true unabashed greatness.  While the “Let’s Put on a Show” finale can’t help seeming anticlimactic in comparison, Cuttin’ Da Mustard’s relaxed, grin-inducing atmosphere disarmed most of my critical defenses. — DAN BUSKIRK
Tuesday March 31, 9:30, I-House
Thursday April 2, 6:45, The Bridge
Friday April 3, 7:45, Ritz East 1