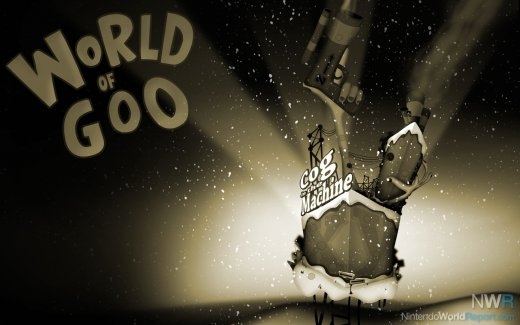 BY ADAM BONANNI Easy to pick-up but tough to master, puzzle games straddle the line between casual and hardcore games, and have a kind of universal appeal — because, hey, who doesn’t love a good brain-teaser? I, GAMER’s target in the cross-hair this week is World of Goo, an independently-developed puzzle game by San Francisco-based studio 2D Boy. World of Goo has an extremely tight focus on what makes this type of game so alluring. It’s full of memorable set pieces, a perfect learning curve, and really well-designed puzzles that strike a balance between skill and logic in order to complete. The stars in World of Goo are the goo balls, those jiggly inhabitants of the titular world.

The backstory goes something like this: The goo balls woke up one day, noticed pipes had sprouted up all over the land, and the curious little buggers decided it was in their best interest to figure out where these pipes led. Turns out they end up at the faceless World of Goo corporation, which turns the goo balls into an exploitable product. There is a bit of a disconnect between the gameplay and story, which details the World of Goo Corporation’s rise to prominence over the years, and the questionable ethical decisions it has made in the interest of expanding the corporate product line. These highly-malleable goo balls can be stretched and/or connected together to construct bridges, towers, or basically any structure that can extend to one of the aforementioned pipes, where the excess balls are sucked away.

World of Goo is broken up into four levels: Spring, summer, fall, and winter; and each level contains roughly 15 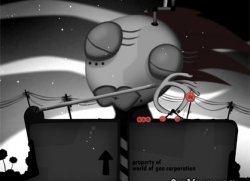 stages.  The gameplay has you constructing bridges to get the goo balls into the pipes, so it’s easy to get the feeling you aren’t contributing much to the advancement of the game’s story through gameplay, but that quickly passes. Some levels break from the formula of reaching the pipe to solve a puzzle that furthers the story, but these usually appear at the end of a level, so their presence is rare. A certain number of balls must be sucked away for the player to progress to the next level, so the challenge is to create a structurally sound edifice that can reach a pipe. You could be forgiven for thinking that does not sound like much fun on paper, but you would be wrong.

IMPRESSIONS
2D Boy is a very appropriate name for the San Francisco studio. Not only are they reviving fun, simple two-dimensional gameplay akin to what flourished in the early- to mid-90’s, but the staff consists of only two very talented individuals; their studio being, in their words, whichever free wi-fi coffee shop they wander into on a given day.” It’s almost embarrassing that the level of polish and finesse in World of Goo rivals most larger studios’ offerings.  Truly, 2D Boy didn’t just make a bunch of puzzles; they made a strong title with a focus on puzzles. The physics system in particular deserves praise for its wholly natural integration into the game. Figuring out how to reach the pipe is only part of the point; the other part is building an extension that won’t collapse under its own weight. The goo balls aren’t entirely rigid, so as more are added to the structure, parts that haven’t been reinforced may buckle or fold. It’s important to think smart when deciding how to build. Speaking of the goo balls, there are alot of them; approximately 15 different types, all with different abilities. New goo balls are introduced up to the very last stages of the game, and this goes a long way towards keeping the gameplay interesting the entire way through.  Some levels will have you destroy structures instead of building, using the flammable goo balls to set off bombs while others have you using the slingshot goo to jump across stages toward your goal.

CONTROLS
Controls are super straightforward for this one — your computer keyboard and mouse. The mouse is used to click and drag goo balls where a white outline will appear showing you how the goo will situate itself on the structure once you release it.  Everything works well, and the responsiveness of the mouse control allows for some quick and precise building

World of Goo has a distinctly charming graphical style. Everything onscreen — from backgrounds and foregrounds to the characters themselves — is richly detailed and animated with wonderful fluidity. Graphics-wise, it’s faultless. Some may be put off by the flat design of the world and its inhabitants, but most scenes look like they jumped out of a highly-imaginative child’s picture book. The style changes with each season, or level, the game passes through, establishing a unique visual theme for each of the four level’s corresponding climate changes. The soundtrack is also high quality. This isn’t some forgettable game soundtrack; there are recurring motifs and variants on themes that establish continuity. The soundtrack is extremely well thought out, and best of all, it can be grabbed for free right here. Beautiful, haunting, and kinda fun in some places, the tunes fit the game like hand-in-glove.

DIFFICULTY
I’m not much of a puzzle gamer, admittedly, due to the difficulty and complexity of the genre.  The most basic crossword puzzle or sudoku triggers rage and frustration. That being said, I had an absolute blast with World of Goo.  One of the reasons is your objective is clear, and most importantly, fun.  Sometimes its simply a matter of of trial and error gameplay. A helpful and ever-present sign painter with a great sense of humor gives you basic clues on how to complete a level from time to time, but for the most part you’re on your own (unless you take the easy way out and look at a strategy guide, but where’s the fun in that). No puzzle in this game is a real mind-melter, which allows the player to have a great sense of accomplishment when they complete each stage. The one catch in the difficulty of the game is OCD mode.  On top of meeting the basic criteria for completing a stage, OCD mode is an optional challenge that necessitates collecting more goo balls or completing a stage in a certain amount of time or moves. There is no room for error, and getting almost any of the bonus OCD flags is a true test of skill.  Coming back after beating the game and trying OCD mode is like playing an entirely new game due to the extra planning required to meet the game’s criteria.  It’s a great little addition, but thankfully, it’s optional

SEX/VIOLENCE
None.  Nada.  Zip.  This is as pure and wholesome as games get.  The ESRB has rated World of Goo “E” for Everyone for Comic Mischief.

World of Goo retails for $19.99 for the PC/Mac/Linux version, available for digital download on 2D Boy’s website and $14.99 for the Wii version sold through WiiWare.  The free PC/Mac/Linux demo is available here so give it a shot.