Van Morrison recorded and released his masterpiece Astral Weeks 41 years ago, and to celebrate he released a live version of the album. This gave Jim and Greg a perfect opportunity to look back at Astral Weeks with a Sound Opinions Classic Dissection. Astral Weeks didn’t produce huge hits, but as Jim and Greg explain, this record is unique from any other in Van Morrison’s collection, and in fact, in rock history. It melds rock, blues, folk and jazz in such a way that makes it hard to define. The jazz musicians who contributed to this sound were guitarist Jay Berliner, drummer Connie Kay and bassist Richard Davis. But, in addition to the music, Jim and Greg both marvel at the emotions conveyed by the songs on Astral Weeks. You hear Van Morrison struggle with the search for home and the impermanence of life. It’s as much a poem as it is an album, making it a classic in the Sound Opinions’ book…Recently Greg’s been thinking about whatever happened to soul singer D’Angelo. He made what Greg would consider a masterful album in 2000. Voodoo put D’Angelo at the heart of the Neo soul movement, but that’s the last we’ve heard from him. Greg can’t explain the disappearance, but he can relive the singer’s glory days with this week’s Desert Island Jukebox song “Devil’s Pie.” 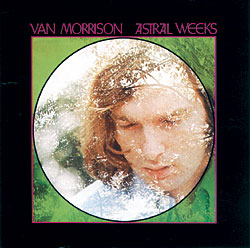 holds its secrets all these years later. The converted need no further preaching about Astral Weeks, so it’s the uninitiated I’m reaching out to here. First you need to dispense with the image of Van as the largely irrelevant pot-bellied sourpuss we know today. Flash back to Belfast in the mid-’60s: Van is winding down his tenure as blues shouter for Them — a roughneck collective of bruising whiteboy R&B and flame-throwing garage-punk snarl — ready to make the leap from drunk-up wailer to cosmic poet-seeker. Legend has it that Van laid down these songs with just his voice and acoustic guitar like one of those paint-by- numbers sketches, and that a team of crack session men fingerpainted in all the breezy jazz-blues swirl and Celtic-soul sorcery afterward — which, if true, is all the more astonishing given how symbiotic and intuitive everything sounds. What any of it means is almost beside the point. The closest analog is the luminous ambiguity of James Joyce’s Ulysses in that Van was trying to evoke feelings and visions — tar-black blues and red wine ecstasies — that transcend literal meaning on their way to, um, higher altitudes. — JONATHAN VALANIA Hour 1
Last week, the federal government announced it was giving AIG an additional $30 billion dollars to save the international insurance giant from going under. Add that to the $150 billion the company got last fall. Even more interesting is that last week AIG reported losses in the last quarter of 2008 totaling $61 billion – the largest quarterly loss in history. In this hour of Radio Times we examine the question – Why is AIG to big to fail? Our guests are Penn law professor TOM BAKER and BusinessWeek writer DIANE BRADY. Listen to the mp3

Hour 2
On March 9th, 1959 the Barbie doll was introduced at a New York Toy Fair. Since then she’s had many careers, outfits, hair and skin colors and his celebrating her birthday in the company of millions of devotees and critics looking on. We’ll look back on Barbie’s life with Columbia University Sociologist STEVEN DUBIN and The Nation magazine writer KATHA POLLIT. Listen to the mp3 According to a report on home foreclosure issued Mar. 6, 2009 by the Congressional Oversight Panel charged with monitoring the use of bailout funds, the rate of home foreclosure is now three times its historic rate — “so large that it threatens the entire economy.” Panel chairwoman Elizabeth Warren joins Fresh Air to discuss the foreclosure problem — and what can be done about it. The Congressional Oversight Panel was created in October 2008 to oversee the $700 billion Troubled Asset Relief Program (TARP). Warren was appointed chairwoman in the panel’s first meeting. In December 2008, Warren criticized the bailout program for lacking a clear direction or approach. Warren is a Leo Gottlieb Professor of Law at Harvard Law School and the co-author of The Two-Income Trap: Why Middle-Class Mothers & Fathers Are Going Broke, which she wrote with her daughter in 2003.

The Dodos‘ music combines the propulsive drive of Sonic Youth with the odd pop quirks of Animal Collective — surprising, given that the band only has two members. Meric Long had long been studying different types of music, including West African Ewe drumming and acoustic blues guitar, and often performed as a one-man show with guitar, loops, and keyboards. Then he met Logan Kroeber, a versatile drummer interested in unpredictable percussion techniques, and formed The Dodos.

THE DODOS: The Fool