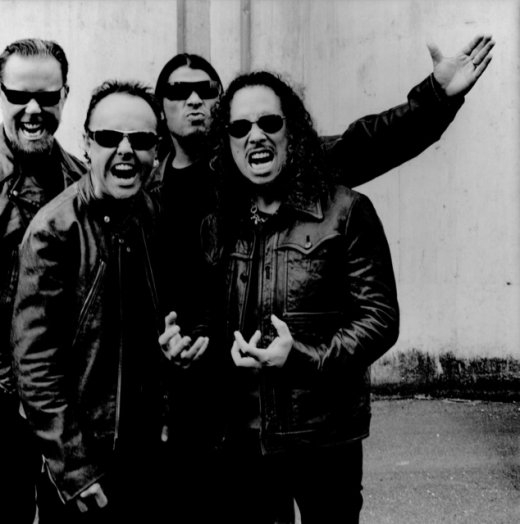 BY JONATHAN VALANIA FOR THE INQUIRER Saturday night at the sold out Wachovia Center, Metallica gave no indication they plan to give up the ghost any time soon, despite the four large metal caskets hanging precariously over their heads, a visual riff on the funereal cover art of the new Death Magnetic. Scurrying out onto the darkened stage like black-clad ninjas, illuminated by a two-story high mesh of lasers, Metallica launched into the new “That Was Just Your Life” with the conviction of men who have learned the hard way that no one here gets out alive. Sounding at times like a B-52 trapped in the belly of an oil tanker, Metallica dug deep into their hairier, scarier 80’s catalog, unleashing the punishing roar of “Creeping Death” and “Ride The Lightning.” And then they dialed back the heaviosity for songs like “Unforgiven” and “Nothing Else Matters” that have helped make them the U2 of metal.

The band seemed eager to connect with the audience — “Did you miss us?” asked frontman James Hetfield, his hair shorn into a boyish shock of blonde — and the tour’s unique staging seems designed to minimize the distance between the artist and the audience. The outsized stage took up most of the floor of the Wachovia, with the general admission crowd surrounding all four sides. There was no set upstage or downstage, instead a series of microphones ringed the perimeter of the stage and band members constantly shuffled from this side of the stage to that, anchored by drummer Lars Ulrich positioned dead center on a rotating riser. The net effect was a constantly migrating (and democratizing) sense of where the front row was. At the same time, the sheer vastness of the stage rendered the band somewhat diffuse; they were everywhere and nowhere at once.

But even if the staging denied you the ability to see the foursome in close proximity locking in tandem, you sure could hear them, with the volume set at skull-crushing decibels. And barring an uncharacteristic stretch of sloppiness midpoint the epic “Master of Puppets” and a rushed, and thereby somewhat anti-climactic, intro to their biggest hit, “Enter Sandman,” Metallica were exemplars of precision ferocity and heavy metal pageantry. During “One” a phalanx of flames rising out of the top of the guitar amps danced in time with the music. And come the climax of “Enter Sandman,” towering, Oz-like pillars of flame erupted out of the stage, the heat of which could be felt on your face 30 rows away. For some reason, you really feel like you got your money’s worth when that happens.