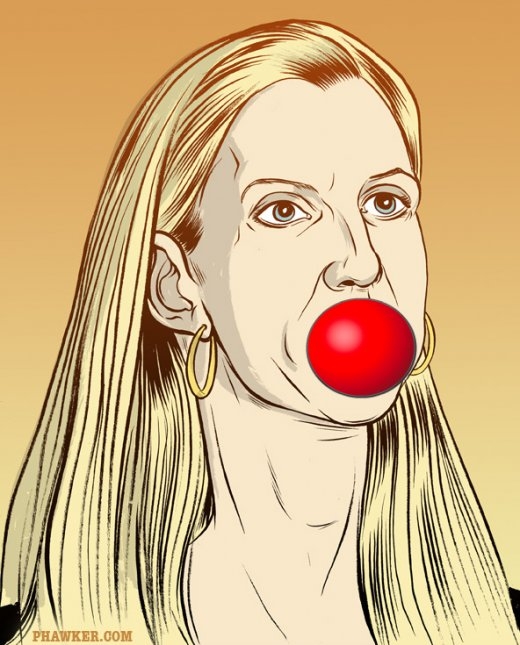 DRUDGE: The nation’s top selling conservative author has been banned from appearing on NBC, insiders tell the DRUDGE REPORT. Banned for life! “We are just not going to have her on any more,” a top network source explains… MORE

TV NEWSER: Late today, NBC News denied the story with this statement: “We’ve had Ann Coulter on ‘Today’ many times, but because of the news in Washington and the Middle East, we decided to cancel her appearance tomorrow. Understanding the media as well as she does, we are sure she knows this happens from time to time. We look forward to welcoming her back in the future.” MORE

MEDIA MATTERS: NBC has repeatedly provided Ann Coulter a platform to spew her inflammatory rhetoric even as NBC-affiliated hosts and anchors have expressed disapproval of her statements or criticized the media for promoting her. Coulter’s latest book, Guilty, is rife with such inflammatory comments, including saying that the Democratic

primaries were a contest of “Who’s the Biggest Pussy?”; calling children whose parents divorce “future strippers” in a chapter titled “Victim of a Crime? Thank a Single Mother”; and calling former White House press secretary Scott McClellan “retarded.” Nevertheless, Coulter has announced that she is scheduled to appear on Today on January 6. MORE

POLITICO: Ann Coulter was scheduled to appear on the “Today” show Tuesday morning to promote her new book, “Guilty.” But it’s now been canceled, according to her website. Coulter wrote: “TODAY SHOW AND TODAY SHOW FOURTH HOUR: CANCELLED!” MORE

ANN COULTER: “I guess this ends the ‘they just want to get ratings’ argument about liberal media bias.” MORE

TV NEWSER: Following Coulter’s comments about Jews — “We (Christians) just want Jews to be perfected” by becoming Christians, and her expressed belief that the world would be better off without Jews — on The Big Idea in October 2007, TVNewser asked Today show anchor Matt Lauer if Coulter would be invited back to “Today.” MORE

TV NEWSER: Earlier this evening NBC told TVNewser they had offered Coulter a segment on Wednesday’s show, but it didn’t sound like she’d be showing up. “I think I’ll accept and then cancel at the last minute,” she said. MORE

NEWSBUSTERS: Presumably a last minute replacement for the possibly NBC banned Ann Coulter, MSNBC host Rachel Maddow appeared on Tuesday’s “Today” show to drop invective about the Bush administration’s “torture” policies. Instead of the rousing bit of Barack Obama bashing and criticism of the fawning coverage of him by the liberal media that would’ve surely been delivered by Coulter, “Today” viewers were treated to the following slam of Bush policies via a Maddow defense of Obama’s choice of Leon Panetta as CIA Director…MORE

HUFFPO: The Minnesota State Canvassing Board confirmed on Monday that Al Franken has won his Senate election, ending a weeks-long recount process that started with the Democratic challenger facing a roughly 215-vote deficit. The final tally left Franken with 1,212,431 votes to Sen. Norm Coleman’s 1,212,206 votes, a 0.0077 percent margin of victory. But while the canvassing board’s ruing marked a cap to a long and wild election, it did not secure Franken’s spot in the United States Senate. Even as state officials were finalizing ballot numbers, Norm Coleman’s campaign was making preparations to legally challenge the results. MORE