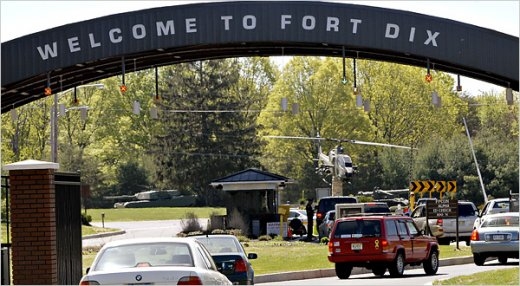 INQUIRER: A federal jury today found the five foreign-born Muslim men guilty of conspiring to kill military personnel, but not guilty of attempted murder. The verdict ends one of the country’s most sensational cases of domestic terrorism, a case that garnered international headlines on May 7, 2007, when the defendants were arrested in coordinated raids. On that day, brothers Dritan and Shain Duka attempted to buy seven rifles from Mahmoud Omar, who was working as an FBI informant.

A third Duka brother, Eljvir, also was arrested that day. Like all of the defendants, the brothers were born overseas, but raised in South Jersey. The Dukas immigrated illegally from the former Yugoslavia. Defendant Mohamad Shnewer was born in Jordan and is a U.S. citizen. Serdar Tatar, was born in Turkey and is a legal U.S. resident. Shnewer, considered the lead defendant, accompanied Omar on drives to Fort Dix, McGuire Air Force Base, Dover Air Force Base and other military installations. Prosecutors called the trips “surveillance” or “reconnaissance” for an attack. Omar captured hundreds of hours of conversations on a body wire. In many of those discussions, Shnewer talked of killing U.S. soldiers.

The Dukas also were captured on wiretaps talking incessantly of jihad and weapons. Many of those conversations were captured by a second FBI informant, Besnik Bakalli, an illegal Albanian immigrant who often spoke to the Dukas in their native language. Bakalli accompanied the Dukas and others on a weeklong trip to the Poconos in February 2007. During the trip, the men fired at a shooting range several times, played paintball and shopped for guns at local stores. Prosecutors called the Poconos trip “training” for their mission. The defense said it was a vacation that also included horseback riding and swimming.

The defendants’ plan, prosecutors said, was to use a pizza delivery pass to get on the base and open fire. Tatar’s family owned a pizzeria near the base, and kept a map of the base in the shop. None of the men had any connections to terrorists overseas, but prosecutors described them as a classic example of homegrown terrorists inspired by al-Qaeda and radical Islamic philosophy, mainly through watching videos and listening to lectures downloaded from the Internet. MORE