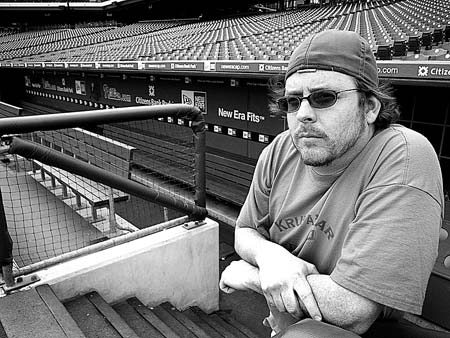 “Brian Hickey was managing editor of City Paper from 2003 to 2008. He sat in a corner office, usually wearing his ratty Cubs hat or a Broncos knit cap (Brian is too stubborn to root only for local teams), and listening to Springsteen, classic rock, hair metal, or — sorry for putting this out there, Hic — Top 40. He slicks back his long hair, shaves irregularly, chose a rumpled white suit on his wedding day, and spends a lot of time in a bar called Krupa’s, at 27th and Brown in Fairmount. At times, he’s moody and impatient; when it counts, he’s supportive and assuring. He’s a loyal friend and a natural reporter. Though Brian covers a lot of sports and politics, he does his best work on crime, and victims. His natural empathy, aversion to sap and, when called for, his rage, allow him to make readers care about strangers who’ve had unfair things happen to them. He’d do a good job with this story.”  MORE

BY DAVE ALLEN Like time, news waits for no man. Keeping up with the funny papers has always been an all-day job, even in the pre-Internets era. These days, however, it’s a two-man job. That’s right, these days you need someone to do your reading for you, or risk falling hopelessly behind and, as a result, increasing your chances of dying lonely and somewhat bitter. That’s why every week, PAPERBOY does your alt-weekly reading for you. We pore over those time-consuming cover

CP: The Holiday gift guide, for the people you love too much to hose this year. The cute little bird on the cover goes “Cheap! Cheap!”, and he delivers, with almost all selections — don’t even bother with the Break the Bank section, there’s a recession on — under $50. The girlfriend and boyfriend lists are a little clothes-heavy, but the threads in the kids section are just precious. Lookit the little aprons!

These adorable frocks for the budding Frida and aspiring Barefoot Contessa have two large front pockets for supplies and/or cookies.

Kids! Cookies! I love the holidays! I love the origami crane ornaments in the hostess section, too, but that weird plant at the bottom creeps me out. Also, no section for moms? Cuz I’m still trying to find something for mine, and I’m stumped. And broke. Mostly broke.

PW: Food, glorious food, with straight-up, no-frills tips on both cooking and dining out while staying healthy and financially solvent. The keys: cutting out bodega shopping, eating local even when you order in, and choosing home-cooked over store-bought.

Purchasing premade foods to save money is, to paraphrase George Carlin, a bit like screwing for virginity. A frozen pizza or can of soup, while inarguably convenient, is flagrantly overpriced when compared to its homemade equivalent. In letting Nestlé and ConAgra cook for us, we’re wasting scads of money—and eating less healthily…The bottom line: It’s much cheaper to cook than to be cooked for. It’s also far more fresh, nourishing and fulfilling.

Amen to that, Jacob Lambert. That same page sports some clutch restaurant deals from Adam Erace, which make up for that gratuitous Andy Reid shot in the opening. Didn’t look so bad to be him on Thanksgiving night. CP: Take off your pants and jacket for a happy 2009. Who needs to read about the World Series win? We lived it! Caving in, once again, to the city’s insatiable desire for mustaches. Scott Weiland: Out of the gutter and headed to Philly.

PW: Ironworking: More than just a great back-story for “Flashdance.” Sad news for would-be adoptees, but I intend to do my part to help this Sunday. Score another one for Q-Tip, because he’s been kicking Axl Rose’s ass since at least 1994; check his guest spot on Ill Communication. 20 lead singers, 20 times more awesome than other bands.

WINNER: For their fallen colleague, CP takes it this week. You could say that a paper covering its own people isn’t news; all I know is that could have been me a few months ago, back when I regularly rode thePATCO late at night. Get well soon, Brian.