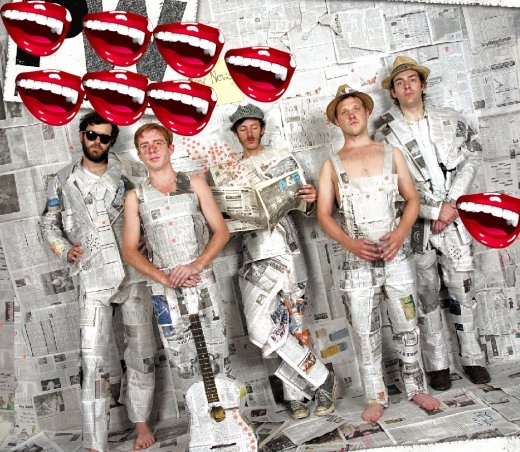 BY JONATHAN VALANIA FOR THE INQUIRER  There are few greater pleasures in this American life than watching a young, gifted rock band in the prime of its youth burn through its set before an adoring hometown crowd with the confidence of five young men who’ve come to realize that — after all the blood, the sweat and the tears that got them to this point — they are making their mark on the world.  It’s even better when the young, gifted band is local. Such was the case Friday night at the way-sold-out Starlight Ballroom, where Dr. Dog staged an auspicious homecoming concert, having just returned from a triumphant European tour in support of Fate, their fifth — and arguably best and brightest —  album.

After the better part of six months on the road, this Dog can hunt, and Friday night they were loaded for bear, tearing through a set that drew largely from the last three albums with a precision and intensity heretofore unimaginable and, frankly, unexpected. The exceptional growth exhibited on Fate – the ambitious arrangements, the crystalline harmonies, the impeccable tone choices – was on full display Friday night at the large converted ballroom just below Ninth and Spring Garden.

At points, bassist-singer-songwriter Toby Leaman, rocking a gray fedora, pushed his lead vocals on “Die, Die, Die” and “100 Years” into soul singer shred territory.And the whole band rumbled so loudly – wailing guitar leads, subsonic bass, crackling drums and pillowy organ fills – it was immediately apparent that this little slacker choo-choo train that could from West Chester had morphed into a mighty locomotive capable of transporting large numbers of people, and fully deserving of their hard-won global rep.

With all three guitarists pirouetting and duckwalking, or leaping off the drum riser, the Dog’s giddiness was infectious. The stage was festooned with all manner of flora and fauna, the ceiling was bejeweled with glittery garlands, and the whole club bathed in an aqua hue, which made you feel like you were standing at the bottom of an aquarium.

For whatever reason, the aquarium vibe lent the proceedings a greater sense of intimacy. The kumbaya moment was undoubtedly during “The Breeze,” Fate’s splendid opening track. Singer-songwriter-guitarist Scott McMicken, rocking a red ski cap and black Ray Bans, barely finished warbling out the opening lines of “The Breeze” before it became a mass singalong, and for that brief and shining moment, one thousand strangers were suddenly old friends.