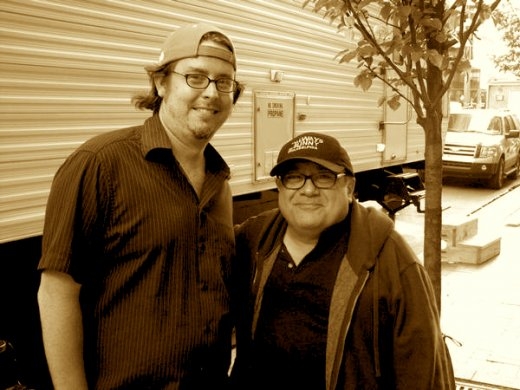 Brian Hickey (pictured above with Danny Devito, on the set of It’s Always Sunny In Philadelphia), formerly editor of the City Paper and spokesman for John Dougherty’s unsuccessful bid for Vincent Fumo’s state senate seat (not to mention a trusted colleague during our staff writer days at PW), was seriously injured by a hit and run driver in Collingswood last night, according to his wife Angela. He is currently in the Trauma-ICU of Cooper University hospital and in stable condition after emergency surgery to alleviate swelling of the brain.

INQUIRER: Hickey, 35, was walking to the PATCO station on Atlantic Ave. late Friday when he was struck by an unknown motorist. A nearby resident called 911 at 10:15 p.m. after hearing the screech of brakes and a loud thump. “She saw the car lights, but couldn’t make out the model of the vehicle,” said Hickey’s wife, Angela Klem. Rescue workers found Hickey gravely injured along the side of the road. Hickey was walking and talking when he arrived at Cooper University Hospital in Camden, Klem said. But Hickey’s brain began to swell and doctors placed him in a medically-induced coma. Anyone with information about the hit-and-run is asked to call Collingswood police at (856) 854-1901. MORE

FACEBOOK: Brian needs your prayers, he was a victim of a hit and run last night at 1015pm in Collingswood NJ. He’s in the Trauma-ICU with a subdural hemotoma and cerebral contusions. Please pray for him. Brian is out of surgery. They performed bilateral decompression. He is in stable condition. They could not find his phone, so I have very little phone numbers to update friends. Please call or email me at 215-888-5538, angela_klem@msn.com. Thank you so much for you well wishes at this horrible time.