BY ED KING ROCK EXPERT Each new release by Lou Reed promises a mix of beauty, truth, horror, and mostly unintended humor. That’s a big part of why I’ve hung in with the guy through so many stilted, hectoring albums, such as the spiritually rock-bottom Rock ‘n Roll Heart, the squirm-inducing Mistrial, and the prematurely acclaimed New York, an album that within a few years of its release played like a grainy rebroadcast of an outdated CNN current events show.

Reed never ceases growing up in public, and when we catch him at a relatively fruitful stage in his development he’s still loaded with so many rough edges that even his most ardent fans disagree about the fruitfulness of a given album. Reed’s 1973 rock opera, Berlin, is a good example of this. Following his breakthrough, David Bowie-produced Transformer album, Berlin was panned by many critics as a bloated, forced doomfest. Rock fans hoping for a catchy hit single to follow “Take a Walk on the Wild Side” were ignored. Slowly the ornately arranged album gained a better reputation, first through its “train wreck” appeal, then perhaps, through a grudging acknowledgment that although the album is a bloated, forced doomfest, so are hopeless relationships of the variety of the album’s down-and-out protagonists, Caroline and Jim. I never understood the appeal of mopey bands like The Smiths, but I do my share of moping, and in my book Berlin is as good as any album for working through a case of the bad vibrations.

In 2006, Reed announced that he was going to perform Berlin in its entirety at Brooklyn’s St. Ann’s Warehouse with a monster band of loyal Reed contributors, including Fernando Saunders, Rob Wasserman, Antony, and one of the original Berlin guitarists, Steve Hunter, best known as half of the legendary Hunter-Wagner guitar duo from early Alice Cooper and Reed’s live Rock ‘n Roll Animal band! It was a night that no Reed fan within a 90-mile radius should miss, and of course I missed it. Luckily, this release is a document of that show and accompanies the release of a Julian Schnabel-directed DVD of the proceedings, Lou Reed’s Berlin.

This grand, hyped-up live staging of an ancient, already grandiose rock opera easily could have been a disaster as a live CD, 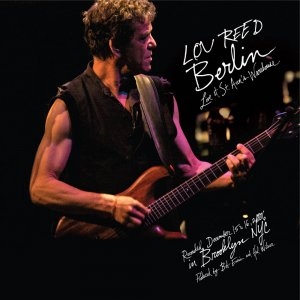 but it’s not. The band stays true to the album’s arrangements, but minus the album’s ’70s studio thud, some of the more visceral parts of the arrangements, especially Hunter’s guitar fills, are allowed to breathe. This adds a lot to the brassy numbers, like “Oh, Jim,” which threatens to break into a mid-70s Stones coda, and “How Do You Think It Feels,” one of the original album’s at-best guilty pleasures. The limited, declining quality of Reed’s voice and the need to project cuts both ways. Quiet, introspective songs that benefited from the lush mush of Bob Ezrin‘s cluttered studio production don’t translate as well. The biggest disappointments for me are “The Kids” and “Men of Good Fortune,” on which the live-audience performing Reed can’t manage to sound as isolated, bitter, and paranoid as he manages to sound on the album’s “head mix.”

The payoff moment for me, however, is the live performance of “Sad Song,” always my key song on the record. Reed struggles with the tender opening lines, but all is forgiven when the bombast of the band backs up the chorus’ succinct couplet, “I’m gonna stop wasting my time/Somebody else would have broken both of her arms.” The care Reed, Ezrin, and the band take in preserving the album’s arrangements make this affair work as a night of long promised/finally fulfilled rock opera.