BY JONATHAN VALANIA FOR THE INQUIRER As a lifelong Caucasian, I am beginning to think the time has finally come to take the right to vote away from white people, at least until we come to our senses. Seriously, I just don’t think we can be trusted to exercise it responsibly anymore.

I give you Exhibit A: The last eight years.

In 2000, Bush-Cheney stole the election, got us attacked, and then got us into two no-exit wars. Four years later, white people reelected them. Is not the repetition of the same behavior over and over again with the expectation of a different outcome the very definition of insanity? (It is, I looked it up.)

Exhibit B is any given Sarah Palin rally.

Exhibit C would be Ed Rendell and John Murtha, who in separate moments of on-the-record candor they would come to 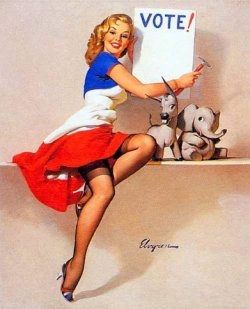 regret, pointing out that there are plenty of people in Pennsylvania who just cannot bring themselves to pull the lever for a black man – no matter what they tell pollsters.

But those are just the little white lies these people allow themselves to be told, a self-induced cognitive dissonance that lets them avoid saying the unsayable: I cannot pull the lever for a black man.

That’s why this ban on white people voting I’m proposing has got to be statewide. And I’m sorry to say, it’s going to have to include all white people, even those who would vote for Obama, because you can’t just let some white people vote. That would be unfair.

By this point, you either think I am joking or are calling me an elitist. I assure you I am neither. OK, maybe a little of both. But it wasn’t always like this. I come from the Coal Belt, from that Alabamian hinterland between Pittsburgh and Philadelphia, as per James Carville’s famous formulation.

I am, in fact, just two generations out of the coal mines that blackened the lungs of my grandfather, leaving him disabled, despondent and, finally, dead at the ripe old age of 54.

I know those people, I come from them. They are not some shameful abstract demographic to be brushed under the rug of euphemism by Wolf Blitzer and his ilk.

I have broken kielbasa with those people. I went to school with their children. I have gone to Sunday Mass with a deer-hunter hangover with those people. They are bitter with good reason, and they are armed because they are scared. They mean well, but they are easily spooked.

I fear for what is to become of them after the campaigns leave town for the last time, and Scranton and Allentown and Carlisle go back to being the long dark chicken dance of the national soul they were before the media showed up.