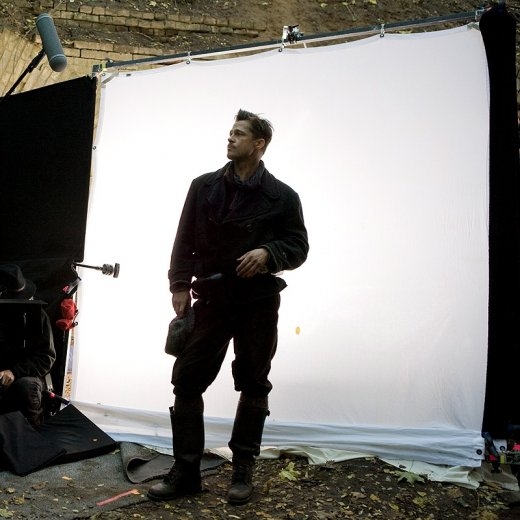 WIKIPEDIA: Entering the 21st century, director Quentin Tarantino had been penning several scripts, including one for the World War II adventure film Inglorious Bastards. Tarantino described the premise in October 2001, “[It’s] my bunch-of-guys-on-a-mission film. [It’s] my Dirty Dozen or Where Eagles Dare or Guns of Navarone kind of thing.”[5] The premise had begun as a Western and evolved into a World War II version of The Good, the Bad and

the Ugly set in Nazi-occupied France. The story changed to be about two maverick units from the United States Army that had “a habit of scalping Germans” before changing again.[6]

Tarantino also sought to present the film as a Spaghetti Western set in Nazi-occupied France. He explained his intent, “I’m going to find a place that actually resembles, in one way or another, the Spanish locales they had in spaghetti Westerns—a no man’s land. With American soldiers and French peasants and the French resistance and Nazi occupiers, it was kind of a no man’s land. That will really be my spaghetti Western but with World War II iconography. But the thing is, I won’t be period specific about the movie. I’m not just gonna play a lot of Édith Piaf and Andrews Sisters. I can have rap, and I can do whatever I want. It’s about filling in the viscera.”[12] The director described the scale of the project, “It’ll be epic and have my take of the sociological battlefield at that time with the racism and barbarism on all sides—the Nazi side, the American side, the black and Jewish soldiers and the French, because it all takes place in France.” Tarantino planned to set the film around the time of D-Day (June 6, 1944) and

VARIETY: Mike Myers has been recruited by Quentin Tarantino to join the ensemble cast of “Inglorious Bastards,” the Tarantino-scripted pic that the Weinstein Co. and Universal will put into production Oct. 13 in Germany. Myers will play British Gen. Ed Fenech, a military mastermind who takes part in hatching a plot to wipe out Nazi leaders.

NEW YORK MAGAZINE: The script is 165 pages long and follows a squad of American soldiers called the Bastards — a guerrillalike force who travel behind German lines in 1944, striking terror into the hearts of Nazi soldiers. The Bastards are headed by Lieutenant Aldo Raine — the role we’d imagine Tarantino is hoping to land Brad Pitt for — described by the script as a “hillbilly from the mountains of Tennessee,” who has around his neck a scar from where he survived a lynching. (”The scar will never once be mentioned,” Tarantino writes.) In a parallel story, Inglorious Bastards follows a French Jewish teenager named Shosanna who survives the massacre of her family and flees to Paris, where she winds up running a movie house during the Nazi occupation. The Bastards’ and Shosanna’s stories intersect when a gala premiere of a Goebbels-produced propaganda film is put on in Shosanna’s theater, with Hitler and most of the German High Command scheduled to attend. Both the Bastards and Shosanna launch plots intending to end the war a little earlier than anyone expected. MORE