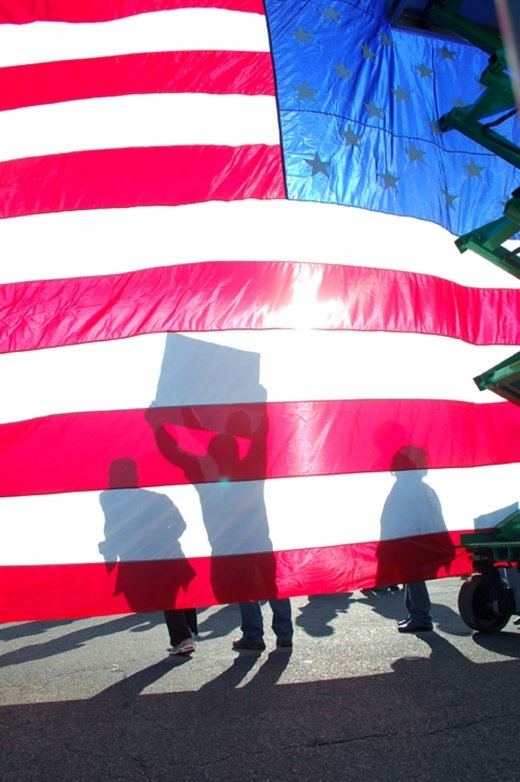 STARS AND STRIPES: Rally For Change, Progress Plaza, Philadelphia, 8 AM

REMARKS OF SENATOR BARACK OBAMA: We meet at a moment of great uncertainty for America.  In recent weeks, we’ve seen a growing financial crisis that’s threatening not only banks and businesses, but your economic security as well.  It’s getting harder to get a loan for that new car or that small business or that college you’ve dreamed of attending.  And in recent days, millions of Americans have lost more of their investments and hard-earned retirement savings as the stock market has plunged.

I know these are difficult times.  I know folks are worried.  But I also know that now is not the time for fear or panic.  Now is the time for resolve and steady leadership.  Because I know we can steer ourselves out of this crisis.  This is a nation that has faced down war and depression; great challenges and great threats.  We have always seen that mountaintop from the deepest valley.  We have always risen to the moment when the moment was hard – and we can do it again.  We can restore confidence in our economy and renew that fundamental belief – that here in America, our destiny is not written for us, but by us.

America is home to colleges and universities that are the envy of the world, and some of the biggest ideas and innovations in history have come from our small businesses.  We’ve got the hardest workers on Earth – folks who work two jobs or three jobs and take that last bus home at night because they want something more for their children.  And no one works harder than folks here in Pennsylvania – just ask my friend, Joe Biden, he’ll tell you.  So while it won’t be easy, there is no reason we can’t make this century another American century.

Unfortunately, my opponent still sees things differently.  Now, I want to acknowledge that Senator McCain tried to tone down the rhetoric yesterday, and I appreciated his reminder that we can disagree while still being respectful of each other.  I’ve said it before, and I’ll say it again – Senator McCain has served this country with honor, and he deserves our thanks for that.

But when it comes to the economy, and what families here in Pennsylvania are going through, Senator McCain still doesn’t get it.  Yesterday, Senator McCain’s campaign manager actually said that Senator McCain wasn’t talking about the market because there’s just not much a candidate for President can say – and they aren’t sure what he’d say each day even if he did talk about it.  Last week, in the midst of the most serious economic crisis of our time, his campaign announced that they plan to “turn the page” on the discussion about our economy so they can spend the final weeks of this election attacking me instead.  They said, and I quote, “if we keep talking about the economy, we’re going to lose.”  So the last few days, we’ve seen a barrage of nasty insinuations and attacks, and I’m sure we’ll see much more over the next 24 days.

But here’s the thing.  They can run misleading ads, and pursue the politics of anything goes, and try to change the subject.  They can do that – but it’s not going to work.  Not this time.

We simply cannot afford four more years of the economic theory that says we should give more to those with the most and hope prosperity trickles down to everyone else.

It is time to turn the page on eight years of economic policies that put Wall Street before Main Street but end up hurting both.  We need policies that grow our economy from the bottom-up, so that every American, everywhere has the chance to get ahead.  Not just corporate CEOs, but their secretaries too.  Not just the person who owns the factory, but the men and women who work on its floor.

These are the Americans I’m standing with.  These are the folks I’m fighting for.  That’s the kind of leadership I’m offering.  That’s what I mean when I talk about change.

Change means rebuilding this economy.  We know that it’s time to create the good-paying jobs of tomorrow.  Pennsylvania is hurting.  Thousands of jobs have been lost this year and wages are flat-lining.  But it doesn’t have to be this way.  That’s why I’m going to stop giving tax breaks to companies that ship jobs overseas, and start rebuilding the middle class by helping companies create jobs here in Pennsylvania.  I will be a President who puts you first, Pennsylvania.  Because I believe in the American people and what we can do together.  And if we want to turn this economy around and lead the world in the 21st century, we have to create the high-wage jobs of tomorrow right here in America.

So we’ll invest $15 billion a year in renewable energy to create five million new, green jobs over the next decade – jobs that pay well and can’t be outsourced.  And we’ll provide affordable loans for our small businesses, eliminate their capital gains taxes, and give them tax incentives to create new jobs.  That’s the change we need.

Change means a tax code that doesn’t just work for folks at the top – but for all of us.  While my opponent wants to give $200 billion in tax cuts to the biggest corporations in America, and $700,000 a piece for the average Fortune 500 CEO — I’ll give a middle-class tax cut to 95% of all workers.  And if you make less than $250,000 a year, you won’t see your taxes increase one single dime – not your payroll taxes, not your income taxes, not your capital gains taxes – nothing.  Because in an economy like this, the last thing we should do is raise taxes on the middle-class.

Change means finally fixing our health care system.  Under my plan, if you have health insurance, the only thing that will change is that you’ll pay lower premiums.  If you don’t have insurance, you’ll be able to get the same kind of health insurance that Members of Congress get for themselves.  We’ll give small businesses a tax credit to pay 50% of the cost of covering their employees.  And we’ll tell insurance companies, no more discriminating against people with pre-existing conditions, period.  That’s the change we need.

Change means giving every child, everywhere the skills and knowledge they need to compete with any worker, anywhere in the world.  That means investing in early childhood education, and recruiting an army of new teachers, and making a deal with every American who has the drive and the will but not the money to go to college: if you commit to serving your country after you graduate, we will make sure you can afford your tuition.  You invest in America, America will invest in you, and together, we will move this country forward.

Finally, change means taking on the corruption in Washington and on Wall Street to make sure a crisis like this can never happen again.  I’ll put in place common-sense regulations to keep our market free and fair and restore accountability and responsibility in our boardrooms.

And I’ll go through the entire federal budget, line by line, and eliminate any spending that isn’t helping our families.  And you know where I’ll start?  By ending this war in Iraq that’s costing $10 billion a month while the Iraqi government sits on tens of billions of dollars in surplus.

I won’t pretend this will be easy or come without cost.  We will all need to sacrifice, and we will all need to pull our weight, because now more than ever, we are all in this together.  This country and the dream it represents are being tested in a way that we haven’t seen in nearly a century.

We can do this.  We’ve done it before.  Some of us had grandparents or parents who said maybe I can’t go to college but my child can; maybe I can’t have my own business but my child can.  I may have to rent, but maybe my children will have a home they can call their own.  I may not have a lot of money, but maybe my child will run for Senate.  I might live in a small village, but maybe someday my son can be president of the United States of America.