CNN: PHILADELPHIA – Sarah Palin partook in an established political ritual on Saturday night when she headed to Tony Luke’s in south Philadelphia to order a pair of cheesesteaks with whiz and onions. But as the kitchen sizzled and orders were barked out, Palin found herself talking politics, calling McCain’s debate performance “awesome” and taking questions from a voter about the hunt for terrorists in Pakistan. MORE

CNN: WASHINGTON — Sen. John McCain retracted Sarah Palin’s stance on Pakistan Sunday morning, after the Alaska governor appeared to back Sen. Barack Obama’s support for unilateral strikes inside Pakistan against terrorists. “She would not…she understands and has stated repeatedly that we’re not going to do anything except in 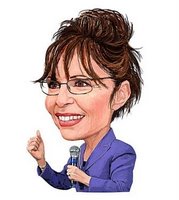 America’s national security interest,” McCain told ABC’s George Stephanopoulos of Palin. “In all due respect, people going around and… sticking a microphone while conversations are being held, and then all of a sudden that’s—that’s a person’s position… This is a free country, but I don’t think most Americans think that that’s a definitive policy statement made by Governor Palin.” MORE

PHAWKER: Pakistan Shmakistan. What the people REALLY wanna know is: Pat’s or Geno’s?

ATLANTA JOURNAL CONSTITUTION: Time and again, she has shown no real familiarity or comprehension of national or international policy. In fact, her interview with Katie Couric is destined to become political legend. Afterward, one McCain aide tried to explain Palin’s performance in that interview by claiming that Couric had asked Palin “a series of trapdoor questions.” They weren’t trapdoor questions, they were basic questions, and simply put. Things got even more absurd this week after a voter in Philadelphia asked Palin whether US forces ought to chase terrorists across the Afghan border into Pakistan. Absolutely, Palin said, thus taking a position identitical to that of Barack Obama and contradicting that of John McCain. Here’s how the conversation with the voter, Michael Rovito, played out:

“How about the Pakistan situation?” Rovito asked. “What’s your thoughts about that.”

“It’s working with Zardari to make sure that we’re all working together to stop the guys from coming in over the border,” Palin said. “And we’ll go from there.”

“Waziristan is blowing up,” Rovito replied.

“Yeah, it is,” Palin said. “And the economy there is blowing up, too.”

“So we do cross-border, like from Afghanistan to Pakistan, you think?” Rovito asked.

“If that’s what we have to do stop the terrorists from coming any further in, absolutely, we should,” Palin said.

It’s hardly unheard of for a vice presidential candidate to express views different from that of the presidential nominee. Joe Biden has already done so on occasion. But in a later interview with Palin at his side, McCain claimed it was somehow “gotcha journalism” to have reported Palin’s response. Gotcha journalism, to report accurately a vice presidential nominee’s public response to a voter? Here’s the interview. Note also how McCain and Palin try to mislead viewers about the nature of the exchange with the voter. MORE