WALL STREET JOURNAL: The McCain campaign moved its top officials inside Gov. Sarah Palin’s operation Sunday to prepare for what is certain to be the most important event of her vice-presidential campaign: her debate on Thursday with Democrat Joe Biden. Additionally, at the urging of the Republican presidential nominee, Sen. John McCain, Gov. Palin will leave late Monday for his Arizona ranch to prepare for the high-stakes debate. The moves follow 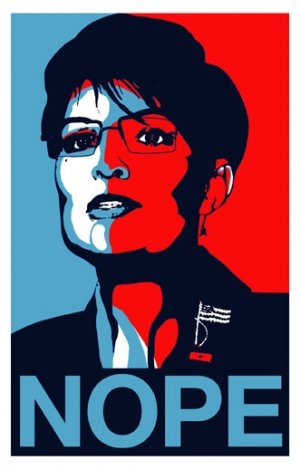 several shaky performances by Gov. Palin last week and come amid concern and grumbling from Republicans, and even a few queries from her husband, Todd Palin, according to campaign operatives and Republican officials. McCain campaign manager Rick Davis and senior adviser Steve Schmidt are planning to coach the candidate ahead of the debate, according to senior advisers. They traveled Sunday to meet the Republican vice-presidential nominee in Philadelphia. After her appearance with Sen. McCain at a rally in Columbus, Ohio, these top officials plan to fly with her on Monday to Sen. McCain’s ranch in Sedona, Ariz., which they hope she will find a comforting place to prep, these people said.

But in recent days, Gov. Palin flubbed quasi-mock debates in New York City and Philadelphia, some operatives said. Finger-pointing began, and then intensified after her faltering interview with CBS anchorwoman Katie Couric. However, she performed better when she took questions from the press after touring Ground Zero and remarked about her parents’ visit there after the Sept. 11, 2001, attacks. Her performance also sparked negative responses from some conservative pundits, and she has slipped in some polls. Last week, nearly half the respondents in a Wall Street Journal/NBC News poll said she is unqualified to be president, while one in three said they were “not at all” comfortable with the idea of Gov. Palin as vice president, up five points from a poll in early September. MORE

ANDREW SULLIVAN: If he drops her or she quits, it’s devastating. Why? Because it’s all about his judgment and executive skills. He did no vetting and made his pick in an instant of insanity. This was his first serious presidential-level decision. It makes Bush’s decision-making look Solomonic. If McCain is forced to acknowledge this, his own campaign is over too. So they cannot give in; they have to double-down; they will train her to do something crazy and polarizing in the debate. They will pray that Biden is sexist or condescending and, given Biden, that may not be too big a gamble. There will be more fireworks and more gambits and more nuttiness: just to prevent Americans from thinking through the real decision before them. MORE

CBS NEWS: The Worm Has Turned

HOWIE KURTZ: The [Couric] interview is drawing extraordinary attention because of the McCain campaign’s calculated decision to shield Palin from reporters. No vice-presidential nominee in modern history has been this inaccessible to the media, reinforcing the perception that she can’t hit major-league pitching.While some journalists say privately they are censoring their comments about Palin to avoid looking like they’re piling on, pundits on the right are jumping ship. MSNBC’s Joe Scarborough says Palin “just seems out of her league.” National Review Editor Rich Lowry called her performance “dreadful.” Dallas Morning News columnist Rod Dreher described the interview as a “train wreck.” Conservative columnist Kathleen Parker urged Palin to quit the race, saying: “If BS were currency, Palin could bail out Wall Street herself.” And the worst may be yet to come for Palin; sources say CBS has two more responses on tape that will likely prove embarrassing. MORE

NATIONAL REVIEW: It was fun while it lasted. Palin’s recent interviews with Charles Gibson, Sean Hannity, and now Katie Couric have all revealed an attractive, earnest, confident candidate. Who Is Clearly Out Of Her League. No one hates saying that more than I do. Like so many women, I’ve been pulling for Palin, wishing her the best, hoping she will perform brilliantly. I’ve also noticed that I watch her interviews with the held breath of an anxious parent, my finger poised over the mute button in case it gets too painful. Unfortunately, it often does. My cringe reflex is exhausted. MORE

THE ATLANTIC: The Palin pick was the most crassest, most bigoted decision that I’ve seen in national electoral politics, in my–admittedly short–lifetime. There can be no doubt that they picked Palin strictly as a stick to drum up the victimhood narrative–small town, hunters, big families and most importantly, women. Had Barack Obama picked Hillary Clinton, there simply is no way they would have picked Sarah

Palin. To the McCain camp, Palin isn’t important as a politician, or even as a person. Her moose-hunting, her sprawling fam, her hockey momdom, her impending grandmother status are a symbol of some vague, possibly endangered American thing, one last chance to yell from the rafters “We wuz robbed.” Lineup all your instances of national politicians using white victimhood to get into offices–Willie Horton, White Hands, Sista Souljah, Reagan in Philadelphia etc.–they were all awful no doubt. But I have never seen a politician subject an alleged ally to something like this. MORE