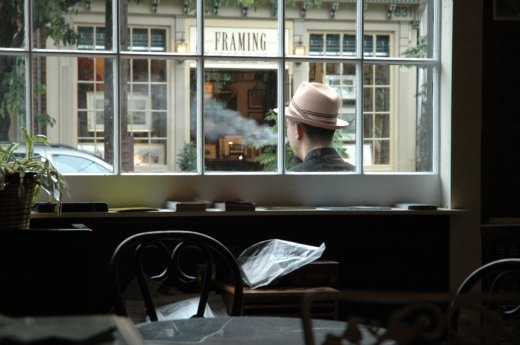 BY COLLEEN REESE Almost every time I pass a cafe, it’s like there’s a magnet in there and my pockets are full of heavy metal. Usually I’m curious about brewing methods or about whether or not they bake their own pastries. I look for things that are memorable and exclusive. Seldom do I walk away surprised or intrigued. Too often they settle for corporate mediocrity, offering Pepsi products at their independent businesses, re-evaluating their menus to better appeal to the same people who drink Dunkin Donuts iced coffee with extra cream and sugar. When I walk into a real cafe I expect to be pulled a good strong cup of coffee, one that demands to be sat with in a low lit room in wooden chairs with brightly colored vinyl cushions or at least, a cappuccino dry enough to actually taste the espresso. I want to luxuriate in the passion that once surrounded cafe culture, when people still knew the difference betweenarabica and robusta (for that matter, when arabica was offered more often than not). I want to see someone ditch the apron and risk a few more minutes out of their day in order to coax out the best flavors out of whatever it is that they make.

There are, of course, those who still nurture their cookery like its their children. They are still here–wiping down mismatched tables and second hand chairs, like they are living an unfinished memoir of what old world cafe culture used to be. So when I passed by the small sign on the sidewalk for Soy Cafe on N. 2nd street (between Fairmount Ave and Green St.) and ventured inside, I almost felt relieved. Relieved to see that there was still a fringe of worthy while

American cafes. The small fridge at the very front of the store was stocked withPuerto Rican fruit juices, Vitamin Waters, and bottles of mineral water. Orbit gum and hard candies I had never seen before were presented in small ceramic bowls and pastry tiers at the front counter. The cafe extends length wise to offer seated tables with one long, rich-looking wooden bench stretching across the entire run of the store.

Soy Cafe is most well known for its homemade soy milk and vegan-friendly options. However, the carnivores and veggie-shy are not left to go hungry. Soy Cafe offers several hearty meat-based wraps, including a Spicy Tuna wrap and a Turkey Avocado wrap. The Turkey Avocado is served with one of their homemade condiments: soy mayonnaise. They also offer homemade apple carrot ginger dressing, garlic mustard, and soy cheese. The wraps tend to range in a pricier category than most other Lincoln Bites, starting at $6.50 and ending at $7.75 but are still worth mentioning for a casual dinner date. For the penny savers, Soy Dots come in 15 and 30 piece options for $2.75 and 5.00, respectively. Soy Dots resemble something like a bite sized, fluffy pancake but taste more like a waffle and come in three different flavors: chocolate, vanilla, and green tea. For those who don’t have time to sit and eat, smoothies and “Anytime Bites” are available those on their way to catch the EL (Spring Garden Station), which is only about two blocks away. The “Anytime Bites” include a bowl ofEdamame (soy beans), and vanilla oatmeal served with a honey soy milk. The variety of smoothies can act as meal-like substitutes (like the Funky Monkey, a blended drink with banana, peanut butter and oatmeal) or as cool-down treat (the MilliVanilli : peach, banana, vanilla, soy milk and honey drink–but mostly tastes like vanilla soy milk blended with ice).The hot drink menu musters up a smattering of coffee and non-coffee beverages, all served in glass or ceramic. The Hot Apple Soy goes for $2.75 and tastes much like the apple version of a soy hot chocolate hybrid on a health kick. The apple cider takes the back seat to the steamed, homemade soy milk topped with a bit of ground cinnamon and a surprising half inch of froth, which I drink gratefully in respect to a craft which is all too often neglected (frothed milk, that is). And although the apple is an afterthought to the soy, the cider does its job in creating a soothing and spicy drink.

The Lincoln Bite: Honey Nut Sweet Toast (two slices of whole wheat toast blanketed in fresh slices of bananas drizzled in honey with a handful of almonds, $3.75) and a small coffee, if possible the Sweet Love blend by Jim’s Organic Coffee ($1.45, coffee which I’m not so proud to say I spent last week’s tip money on for half a pound), total of $5.20 (plus tax). I’m only willing to bend the five dollar rule for a truly good cup of coffee.