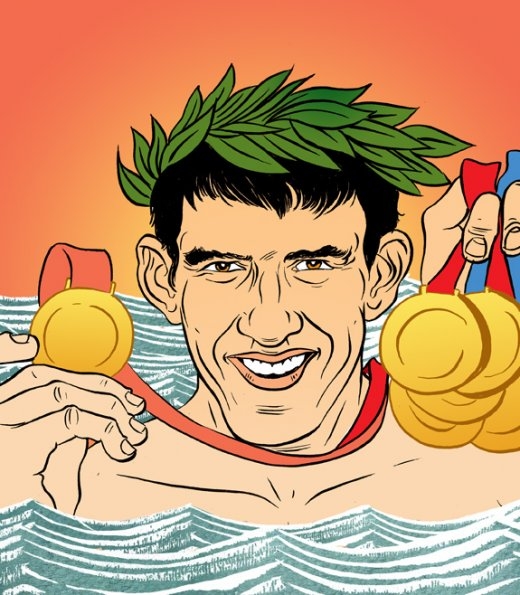 BY ST. JOHN BARNED-SMITH OLYMPIC CORRESPONDENT First things first: I want to call your attention to this amazing race, my favorite by far of Phelps and company. Phelps actually led the relay, swimming a scorching 47.5 seconds for the leg of the relay. Now, unlike other swim events, individual relay legs are almost uniformly faster than the same distance might be in a stand-alone event. There are two reasons for this – one, a swimmer can anticipate when to dive, instead of having to react to a bell or air horn. You’ll see your teammate zooming into the wall, and as he touches, you fly off the blocks. You might gain as much as a quarter second that way — and in swimming a quarter second is halfway to eternity. The other plus of a relay start is that swimmers can step into their dives; rather than leaping from the edge – it forces them a bit farther out into the water. But enough technical hooey.

About the race: Phelps isn’t a sprinter – he generally sticks to the 200 meter events, so even though he didn’t break the past world record was a great swim for him. Phelp’s teammates pulled out into the slightest of leads – Garret Weber-Gale came next, swimming a half second faster than Phelps. Cullen Jones followed, with a time of 47.65, falling behind (though not by much) the French, les shmucks who vowed to smash the US. And then it was time for Jason Lezac. Lezac is old – thirty-two, and a veteran of the 2000 and 2004 Olympics. In the ’04 Games, he also anchored this race, one of two of Phelp’s races that didn’t pan out. He’s been good, just not the best — until now. To be sure, it didn’t look good at first – Alain Bernard flew down the pool, leaving him almost a full second behind. With 50 meters left, it looked like Phelps’ quest for eight golds would fail. And then Lezac dug in. With 15 meters left, he edged up on Bernard, arms flying, shoulders heaving, legs motoring. Then he touched the wall. And then Bernard touched, tardy by an inch or two. All hail Jason Lezac. He swam that leg almost a second and a half faster than Phelps’ opening leg. God bless America!

And now for a brief note on swimsuits. Swimmers are notorious for their suits and race preparations: full body shaves; shaving the calluses from their palms and bottom of their feet; and letting fingernails grow far longer than normal for extra water-ripping power. (My awesome ‘hawk is actually from a championships I swam in for Case Western – the photo’s taken a day before I shaved the rest off for one of my main events. Not that it actually helped. I came in third. Out of three.) Swimmers will practice wearing pantyhose or two, or even three suits, so come race day, that single asphyxiatingly tight speedo will make one’s

swim all the faster. Over the last twelve years, swimsuits have gotten rocket science treatment. Speedo really got the bowl rolling with the Fastskin, soon replaced by the Fastskin II. The multi-hundred dollar suits (full body suits can cost upwards of 400 dollars) had seams engineered to reduce drag, and was made from material that mimicked shark scales. The suits produced less drag than a human’s skin. Now, Speedo’s new LZR Racer actually eliminates seams, since its ultrasonically welded together. It also is made of material that actually repels water – this isn’t going to make our swimmers fly, but it might reduce drag even further. It also compresses and pulls their body into a better hydro-dynamic position, and some claim, add buoyancy. Gnarly stuff. So the big question, fair use of technology, or computerized and space aged doping? Discuss amongst your selves. And yes, it will be on the test.

ABOUT THE AUTHOR: St. John Barned-Smith first discovered the water when his mom made him take swim lessons as a toddler. He swam on competitive swim teams – sporadically – from 4th grade through his senior year in high school, before walking on the Case Western Reserve Swim team, where he got his ass handed to him on a daily basis. (Seriously, he was the slowest kid there.) Nevertheless, a swimmer for life, he’s been glued to the swimming events of the Olympic games ever since the Thorpedo (Ian Thorpe) became a phenom during the 2000 Olympic Games in Sydney. He’s sending these dispatches as a way to destress while writing in the Chicago-based Academy for Alternative Journalism, a paid journalism fellowship which hopes to disprove King Ed about the relevance of the printed word.