ASSOCIATED PRESS: AMMAN, Jordan — Democratic presidential contender Barack Obama vowed on Tuesday to work for a breakthrough in Israeli-Palestinian peace negotiations “starting from the minute I’m sworn into office.” In a news conference here before departing for Israel, he said any U.S. involvement in peace talks must recognize not only Israel’s security concerns but also the economic hardships facing Palestinians. He said he would continue to regard Israel as a valued ally. “That policy is not going to change,” he said. “What I think can change is the ability of the United States government and a United States president to be actively engaged with the peace process and to be concerned and recognize the legitimate difficulties that the Palestinian people are experiencing right now.” MORE 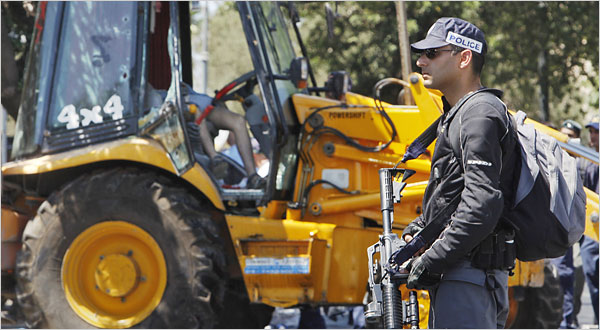 An Israeli security force officer guarded the scene of a rampage by the Palestinian driver of a construction vehicle in downtown Jerusalem on Tuesday. [PHOTO: Kevin Frayer/Associated Press]

NEW YORK TIMES: For the second time in a month, a Palestinian driver of a large construction vehicle plowed into traffic on a busy Jerusalem street on Tuesday, hitting a bus, mangling cars and injuring at least 24 people before the driver was shot dead by an off-duty soldier and a border police officer. The attack was the second in Jerusalem this month involving a construction vehicle and took place on King David Street near the Liberty Bell Park in Jerusalem’s upscale hotel district, close to the King David Hotel. Local media reports said Senator Barack Obama, the presumptive Democratic nominee for president, was due to stay at the hotel on Tuesday evening. Mr. Obama is on a weeklong tour as part of an American congressional delegation.

UPDATE: Christian Bale has been released on bail after spending more than four hours in police custody at a central London station being interrogated over allegations he assaulted his 61-year-old mom, Jenny, and 40-year-old sister, Sharon, Sunday night. “Mr. Bale, who denies the allegation, cooperated throughout, gave his account in full of the events in question, and has left the station without any charge being made against him by the police,” the actor’s lawyers at the high-powered London firm Schillings said in a statement. “At this time, there will be no further comment by Mr. Bale.” PITTSBURGH BUSINESS JOURNAL: Wachovia Corp. has posted a second-quarter loss of $8.9 billion, slashed its dividend and will cut 10,750 jobs as part of a turnaround plan. The job cuts are part of an expense-initiative launched in June. The Charlotte-based Wachovia (NYSE:WB) will eliminate 6,350 active jobs and 4,400 open positions and contractors as it works to find $1.5 billion in cost savings by 2009. About 40 percent of that will come from personnel. Most of the job losses will come from the company’s mortgage business. Wachovia expects to cut 4,400 mortgage employees over the next 12 months and announced it is exiting the wholesale mortgage lending business, meaning it will no longer offer home loans through brokers. Through June the company had eliminated 2,000 mortgage jobs.