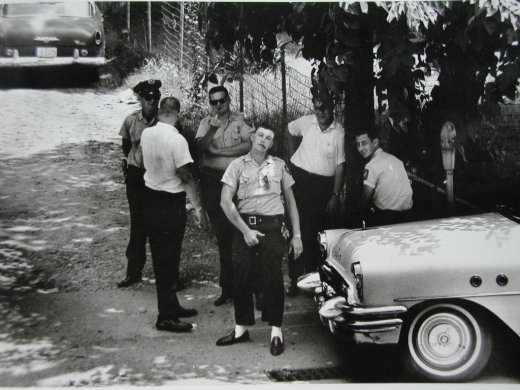 “You know something people, I’m not black but there’s a whole lotsa times I wish I could say I’m not white.” — Frank Zappa, 1966

BY JONATHAN VALANIA As I write this, Hillary Clinton is exit-polling ahead of Barack Obama in West Virginia by a fairly astonishing margin of 40 points. Which is why I am thinking the time has come to take the right to vote away from white people, at least until they come to their senses. Seriously, I just don’t think they can be trusted to exercise it responsibly anymore. I give you Exhibit A: The last eight years. In 2000, Bush-Cheney stole the election, got us attacked and then got us into two no-exit wars. Four years later, white people re-elected them. Is not the repetition of the same behavior over and over again with the expectation of a different outcome the very definition of insanity? (It is, I looked it up)

By this point you either think I am joking or are calling me ‘elitist.’ I assure you I am neither. Not that I can hear you, what with the deafening hiss of the espresso machine on the dashboard of my Volvo and the NPR set for ‘deaf.’ But understand that I am saying this for the good of the country and, in fact, for the good of white people. Because I fear for what is to become of them when I read depressingly dead-on stories like this one in the Financial Times, where a buncha slack-jawed yokels from Cow’s Ass, West Virginia, all lifelong registered Democrats, adamantly tell a British journalist that under no circumstances could they vote for Obama for president, and if it came to it, would vote for McCain because, well, nobody is dumb enough to come out

and say it but THEY WOULD VOTE FOR MCCAIN JUST BECAUSE HE IS WHITE. Just like their daddy did, and his daddy did before him, and so on.

And what do they have to show for it: soul-sucking inter-generational poverty, pervasive ignorance about the basic scientific facts of their own reality, a fundamental misunderstanding of the causality of their economic indeterminacy and a disproportionately high number of people living in mobile homes — in short, analog minds ill-equipped to thrive in the digital future. Broke, dumb and emphysemic is no way to go through life, son. As of this year, West Virginia has both the lowest college graduation rate and the lowest median household income in the nation. And when they get one tiny sliver of a chance to change this situation, i.e. an election, what is their game plan? Voting for the white guy. Why? Because, to paraphrase Ed Rendell, some people in this state just aren’t ready to vote for a black man. That’s just childish, like saying ‘I don’t like broccoli.’ Grow the fuck up. And get a clue: the day poor, under-educated white and black people finally figure out that what truly divides us isn’t race but in fact class is the day the Republican party goes out of business.

The Angry Male VoterThis voter is mad as hell and not going to take it anymore, goddamnit. He votes in a blind rage, growling and spinning tornado-like in the voting booth like the Tasmanian Devil himself. What is he is so mad about? What ISN’T he mad about? The price of this, the cost of that, illegal immigrants this, homosexual weddings that. And so who does the Angry Voter pull the lever for? Someone who is the man he always wanted to be: A rich S.O.B. with a botoxed blonde trophy wife who will quietly, and with a smile, my friend, fuck over guys like the Angry Voter to give the very richest some much needed tax relief.

The Scared VoterThese include, but are not limited to, the so-called Security Moms. Just like a conservative is a liberal that’s been mugged, the Security Mom is a Soccer Mom that’s been 9/11-ed. Their vote is guided by a little Casper the Scaredy Cat Ghost voice inside that says: Islam’s weird and trying to kill me. They all voted for George Bush because he was the one that would keep them safe, because he was President when the 9/11 attacks happened and despite being given ample warning about the gravity of the threat…HEY, WAIT A MINUTE. Too late, the lever has already been pulled. Heh-heh, suckers.

The Greedhead VoterThese guys, with their power ties and their Comcast Towers, don’t so much vote in the election as they underwrite the results, to the tune of untold millions in campaign contributions, soft money and lobbying fees. Their motivation: Keep the game rigged for maximum profit, and maintain the steady migration of prosperity out of the hands of the middle class and into the arms of the highest tax brackets. A high tide can’t lift all boats when you have drilled large holes in the bottom of the middle class. Don’t believe me, read Screwed: Undeclared War On America’s Middle Class.

The Ralph Nader VoterLike the racist hillbillies hard working white Americans of West Virginny, the Ralph Nader voter is also like the turkey voting for Thanksgiving. They want change, they want progressive initiatives, greater corporate accountability, peace, prosperity and social justice for all, bless their bleeding tie-dyed hearts. And so they get on board any high-minded Cinderella third party candidacy that comes along promising all the above. These candidacies promise more symbolic value than any substantive electoral impact, so what’s the harm, right? Two words: Florida 2000. George W. Bush beat Al Gore by just 543 votes. The lesson learned (please God, I don’t ask for much but LET THIS LESSON BE LEARNED) is that while every vote may not be counted, every vote counts.

The Values Voter/The Flag Pin Voter
The God, Guts & Guns crowd. These are people who vote every four years solely to beat back the ever-encroaching homosexual menace. It’s a dirty job keepin’ the fags down — the nastier side of doing the Lord’s work — but somebody’s gotta do it. Many of these voters have serious doubts about Obama’s patriotism. You would think that jumping through the flaming hoops of the Dem primaries for 14 months despite almost daily death threats against him and his family just because he thinks he could make America a better place would mean more than 10 million pledges of allegiances, hand over your heart — but you would be wrong. No, that crap doesn’t matter. These voters always know which guy to vote for, he’s the one wearing the flag pin — that means he loves America more than you and me put together. As Sinclair Lewis so famously said, “When fascism comes to America, it will be wrapped in a flag and carrying a cross.” Enough said.

The Undecided VoterTheir vote is like throwing stones in a pond on a moonless night. You hear the splash but you don’t know where it went in. Anybody who tells a pollster on the eve of an election that they are still — STILL, after endless debates, 24-7 media coverage and non-stop dueling campaign ads on TV — undecided is either stupid or lying, and probably both. After being reminded that a LOT of people died to ensure their right to vote and the very LEAST you could do is make up your fucking mind, these people should be slapped across the forehead with a wet mackerel until they leave the polling place.

RELATED: Senator Hillary Rodham Clinton won the Democratic presidential primary in West Virginia over Senator Barack Obama in voting fueled by strong turnout among the white, working-class voters who have spurned Mr. Obama in recent nominating contests. Mrs. Clinton appeared headed for a strong victory in the primary, with early returns showing her with a 2-to-1 margin. In recent days, even Mr. Obama, who has not campaigned heavily in the state, has all but conceded the contest to her. Given Mr. Obama’s leads in the popular vote and delegates, the West Virginia results are likely to have little practical effect on Mrs. Clinton’s chances at winning the nomination. The West Virginia electorate included 2 in 10 white voters who said race was an important factor in their vote and more than 8 in 10 of them backed Mrs. Clinton. Yet Mr. Obama continued far outpacing Mrs. Clinton in the battle for superdelegates — the party leaders who have a vote on the nomination — picking up four endorsements by midday. And in a sign of the diminished optimism in the Clinton camp, one of her staunchest loyalists, James Carville, said that Mr. Obama would probably be the Democratic nominee. MORE

FIREDOGLAKE: MSNBC is predicting a 2 to 1 split — meaning Clinton would get 19-ish delegates and Obama would get 9-ish, give or take while we wait for real, honest-to-god results that aren’t just based on exit polls. And Chuck Todd says that Obama only has to get 23 percent in either KY or OR to clinch the delegate requirement — he says that Clinton would have to pull off a close to 91% victory margin in every remaining state in order to win, which is most likely impossible. MORE

POLITICO: Democrats picked up a northern Mississippi House seat in one of the most conservative-minded districts in the country Tuesday night — an upset that will reverberate darkly through a House Republican caucus already reeling from losses in special elections in Illinois and Louisiana. With all precincts reporting, the Democratic nominee, Prentiss County Chancery Clerk Travis Childers, defeated Republican Greg Davis, 54 to 46

percent. The results amount to a rebuke of the Republican strategy of trying nationalize the race by tying Childers to Sen. Barack Obama and House Speaker Nancy Pelosi. Obama held low approval ratings in the district, but the nearly $2 million that GOP groups poured into northern Mississippi failed to make the race a referendum on the national political landscape. Republicans dispatched a lineup of heavy hitters in the campaign’s final week, including a pre-election stop Monday by Vice President Dick Cheney. President Bush, Sen. John McCain (R-Ariz.) and First Lady Laura Bush recorded automated calls urging voters to support Davis. A GOP House leadership aide told Politico last week that “if we don’t win in Mississippi, I think you are going to see a lot of people running around here looking for windows to jump out of.” The $1.27 million that the NRCC spent in the heavily Republican district amounted to nearly 20 percent of the committee’s entire cash-on-hand. The committee has now spent more than $3 million to defend three conservative House seats, losing all three of them, and it is ill-equipped financially to compete fully in an ever-widening playing field for November. MORE