BY AMY Z. QUINN Like time, news waits for no man. Keeping up with the funny papers has always been an all-day job, even in the pre-Internets era. These days, however, it?s a two-man job. That?s right ? these days you need someone to do your reading for you, or risk falling hopelessly behind and, as a result, increasing your chances of dying lonely and somewhat bitter. Hey, we know how it is ? so many words to read, so little time to surf for free porn. That?s why every week, PAPERBOY does your alt-weekly reading for you, freeing up valuable nanoseconds that can now be better spent ?roughing up the suspect? over at Suicide Girls or what have you. Every week we pore over those time-consuming cover stories and give you the takeaway, suss out the cover art, warn you off the ink-wasters and steer you towards the gooey caramel center of each edition. Why? Because we like you.

ON THE COVER
CITY PAPER: The bi-annual Music Issue again? Where does the time go? No matter, City Paper will catch your ears up on the last six months. Cover art featuring freak-folk avatar Greg Weeks in a groovy looking Indian feather/roach clip necklace; a well-done piece on White T’s and White Belts by Kellacious White, a father-and-son acoustic recording duo and at least three references to Diplo. But who’s counting.

The CP Playa is chock full of music from all the featured artists, including the cutesy-naughty folk of The Bee Team, who describe their sound thusly:

“Kids and moms really like our music,” says Chrissy Tashjian, who sings and plays bass. “‘Cause it sounds 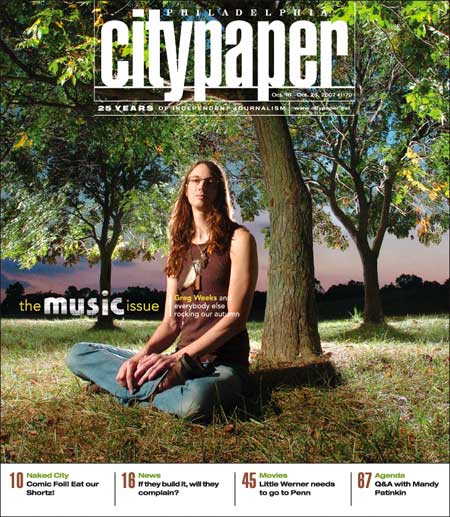 totally cute.” But while the babes are bouncing around to the sprightly bluegrass, the hip mamas are enjoying the words.”Some of our lyrics are really dirty,” singer-guitarist Josh Craft laughs. “They’re like dirty kids’ songs.”

Of course, there’s an interview with David Dye about the new Best of the World Cafe interview book, in which the dean talks candidly about the challenges of winnowing down 15 years’ worth of interviews into one book, and how some didn’t actually make it in. This leaves us wondering/hopeful about the possibility of a sequel:

Sometimes a staffer would transcribe a whole interview before Dye rejected it for being the wrong one or not as good as he’d remembered. His choicest David Bowie interview never turned up, and somehow the wrong Neil Young piece made the cut. Then, after turning everything in, Dye says, his editor told him he had twice as many pages as there were supposed to be. Since the interviews were already cut to length, that meant removing a lot of artists wholesale.

PHILADELPHIA WEEKLY: Man, that Rudy-at-Geno’s story — we refuse to call it Cheesesteakgate — really has legs, making it to PW’s cover a full two years weeks after the event. (In New Media time, that’s like 20 years!) Good idea for a cover, and we cracked up at the cover image featuring Giuliani with a Whiz mustache. Well, whatever the timing, it still never hurts to reiterate what’s really at play here, and why, in the context of the 2008 presidential camapaign at least, Rudy’s snack attack did actually mean something: 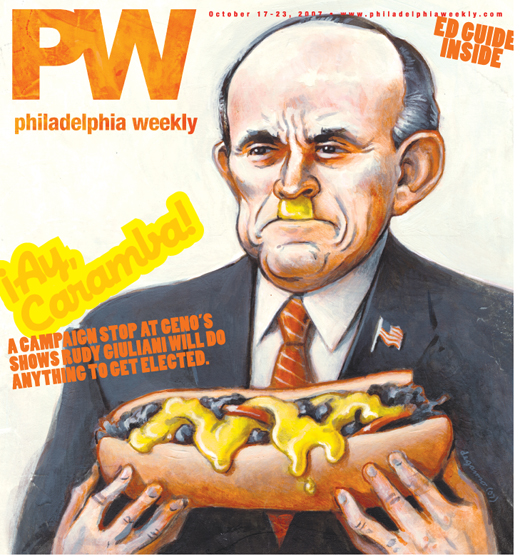 But Joey Vento is a cheesesteak stand owner. Why should we give a shit what he thinks?

His 15 minutes should’ve been up before they started.

Rudy Giuliani, however, is another story. Giuliani was mayor of the biggest, most progressive city in the world, a man many allegedly take seriously.

As mayor, he spoke out eloquently on behalf of illegal immigrants, saying we should look for ways to make it easier for them to become citizens.

In 1994 he told The New York Times: “If you come here, and you work hard, and you happen to be in an undocumented status, you’re one of the people who we want in this city.”

The story hopefully promises a look at “what a cross section of Philadelphians” feel about Rudy’s visit to South Philly as well as their feelings about the no-speak’a-ingles flap. Unfortunately, each of the interview subjects has a qualifier after his or her name, from the filmmaker Tigre Hill to union leaders, spokesmen for immigrants’ rights groups, even a college professor teaching a class on immigration history. This is a cross-section of Philadelphians? Frankly, I’m pretty confident PW’s readers know where the community activists’ thoughts are on this whole thing. It might have been a greater public service, and probably a less predictable story, to ask some regular schmoes on this one.

Still, we liked this, from the owner of DiBruno Bros., because he makes a point which bears repeating, again and again, until the Joey Ventos of this world get it through their thick xenophobic skulls:

CP: The PoeDown ThrowDown rages on between Philly and Baltimore, with Duane repping Ed Pettit in his Editor’s Letter and The Clog apologizing for calling that city in Maryland the “syphilis capital of the universe,” when in fact they are the MRSA Capital of America! Huzzah! Joey Vento confuses being pimped out by the media with being accepted and approved of by the general public.

PW: Haunted house performers give circus folk a run for their money at “Terror Behind the Walls”; the Westin Hotel’s “farm-forward” restaurant slips on a plate of greasy mac n’ cheese; WiFi Philadelphia is blowin’ in the wind.