BY TOMMY ZANE GAYDAR EDITOR OK, I’m not sure if my Ramon rollercoaster has finally reached its zenith, or if turning 39 last week triggered some sort of desperate mid-life crisis, but I totally earned my Oscar nomination this week, complete with hyperventilating, a crying jag, and other assorted acts of anxiety. It all started at my family’s birthday party, replete with yelling and arguing between my sister and her husband. My niece dropped her cell phone in a booth at an Appleby’s and World War III erupted. Of course, the LAST place I want to eat on my birthday was Appleby’s, and, as usual, my restaurant requests went unheard as my pig of a brother-in-law refused to spend more than 15 bucks on dinner. I suggested we get a bucket of chicken and eat in the car, but even that costs a twenty. Post-family drama always has the same effect on me, leaving me really snarky and belligerent AND very insecure; it doesn’t help that the 20th anniversary of my father’s sudden and untimely death just passed.

You’re saying to yourself, “Hmm, all that’s missing here is the much-younger lover to make this midlife crisis really sing!” Is 19 young enough for you?

First, the sex. Christ, I haven’t gotten that lost in passion for years! It’s not just his young and nubile skin, or complete

attention in the sack, but also the “first time thrills.” Having been with Ramon for so long, I had forgotten how good this feels. So, on my birthday, suffering from intense recall of childhood negativity, I am banging this 19 year old.

Of course I use a condom, not that he insisted on it, the foolish girl. So far, so good. The problem comes when I try to turn that fling into a relationship. What on earth was I thinking? This kid could be my drunken Prom Night baby! It’s like stroking a sharp cactus. It all starts with the text messaging. I really fucking hate it, but this is what all the kids do now. It’s actually worse than email; none of the emotion of a real conversation and even more transient. So, we make a date to meet up and, bam! He’s a no-show. Remember Fatal Attraction? Suddenly, I am sobbing and getting in the car to drive nowhere. Tears streaming down my face, I finally pull over and completely lose it. It’s 1 a.m. on a work night, I’m parked near the Art Museum and a complete blubbering fool. I don’t think I can sleep until I hear from him or know where he is. Eventually, I pull myself together and head home for a very shitty night’s sleep, complete with-ultra weird sex dreams about the kid getting gang raped by truckers in a rest stop while I’m forced to watch, blindfolded. What the hell does all this mean? Isn’t the human mind a cavalcade of never-ending entertainment? Who needs extreme sports when you can just be me? 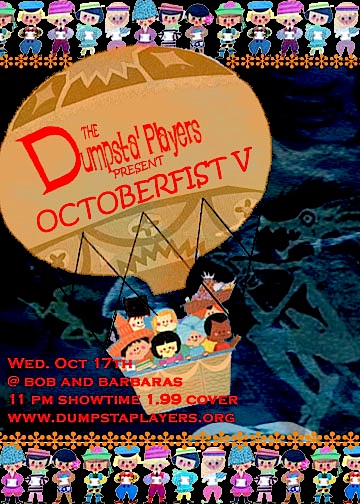 It must be the third week of the month, ’cause the party just kicked into high gear. DJ K-Tell & The Dumpsta Players present “OctoberFist V” tonight! It’s a tribute to all things foreign, including Serge Gainsbourg, Plastic Bertrand and Eurovision faves! Show is at Bob and Barbara’s, 1509 South, 10 p.m. doors, 11 p.m. show.